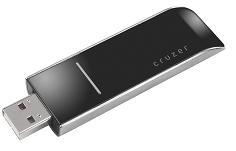 Sandisk have used CES as an excuse to launch a whole host of new memory devices. As well as new ultra-thin memory sticks for Sony Ericsson phones, a compact USB music player and sleek new 2gb+ flash drives (pictured), there are two products worth a special mention.

Sansa Connect is a 4gb MP3 player with Wi-Fi capability, allowing you to connect to music and photos from any internet hotspot. The device – set to hit the US market in March for $249.99 – will contain ‘community features’ via the internet for recommending new music and photos, and also comes with a micro SD slot.

Meanwhile, Sandisk have also unveiled USBTV, an industry-wide initiative that’ll hopefully make transferring DVD content from PC to TV much easier. Sandisk have created the first DVD flash drive, which plugs into a PC by USB and into a television by a new USBTV interface. Sandisk are working with TV manufacturers such as LG, Mitsubishi and Pioneer to encourage the inclusion of these USBTV ports on new televisions. Until then, an adaptor cradle will allow you to connect USBTV devices into regular A/V ports instead. USBTV players are expected to be available in Spring 2007. More info at USBTV.org