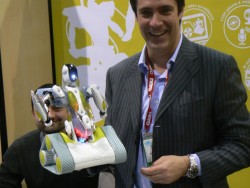 Stand by for a robo-splurge: I’ve been wandering the Sands Hall at CES, and there’s all manner of robots hiding away in the corner. Starting with this Spyke spy-bot, which lurks in your home keeping beady eyes on what’s going on.

He comes with built-in Wi-Fi, a video camera, microphone, loudspeaker and two motors. So he can move around, take pictures and record video and sound, AND act as a VoIP phone and webcam, allowing you to scare the bejaysus out of your kids by suddenly shouting at them if they’re skiving their homework. 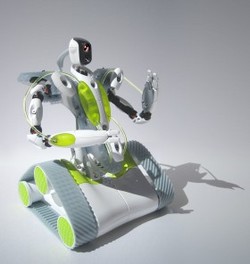 You can also use him as an interface to MSN Messenger, Skype and Google Talk. Plus Spyke acts as an MP3 player, and can be set up to act as a video surveillance device, sounding an alarm or emailing you a photo whenever he detects movement. Note, this could get tedious if you have a boisterous dog at home.

He comes with his own recharging station, which he returns to automatically when his juice is low. He’s made by the French company Erector, but will be sold in the US under the Meccano brand for around $269 starting in mid-2007, and hopefully coming out in the UK soon after. He rules.