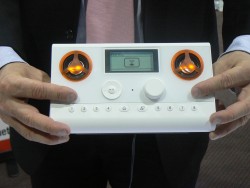 I managed to get hands on with Com One’s new Phoenix IP Radio at tonight’s Digital Experience event at CES. It’s a stereo radio that streams internet radio stations and podcasts via Wi-Fi, which isn’t a new idea, but it’s done slickly here.

The device itself is portable and stylish, with integrated stereo speakers, and the ability to bookmark your favourite stations and songs, as well as retrieve song and artist data from playlists. It’s also got a built-in alarm clock, handily, weighs less than two pounds, and is battery-operated.

It’ll cost $249 in the US, but Com One told me it’ll be around £149 when it’s launched in the UK – the company is talking to ISPs about reselling it, apparently. It can play MP3 and WMA files too, and supports Bluetooth connectivity for wireless headphones too.