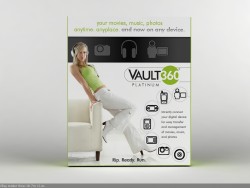 Bamboo Technology was at tonight’s CES Press Preview showing off its Vault 360 software, which aims to replace all the proprietary applications that came with your digital cameras, MP3 players and camcorders.

“We want to take all your photos, music and videos from any device to any other device in a very simple fashion, so you don’t have to use any of the software that ships with them,” says Bamboo president Todd Porter. “You simply plug in the device, and once the content is copied into Vault, you can export those files to any device, and we’ll automatically convert them for you.”

He showed us a mobile phone playing video that had originally been recorded using a TiVo DVR, and then converted to a mobile-friendly format using Vault 360. But does it work with DRM technologies for copy-protected files?

“If your computer has DRM rights, we’ll recognise it so you can transfer your stuff,” says Porter. “Also, we totally circumvent iTunes, so you don’t need it at all. You can use Vault 360 to transfer videos, photos or music to your iPod, which is a feature people really like.”

The Platinum version of Vault 360 costs $49.99 in the US, although a basic version is available for $29.99. Us Brits can buy it on the Bamboo website now, if we have a credit card, but a full European version is coming out at the end of February. “We wanna be the operating system for device conversion,” says Porter. Having looked at the app in action tonight, that’s not just an empty boast.