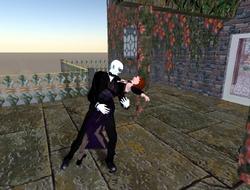 Part Two of our coverage of last night’s MusicAlly Second Life event in London. Following the presentation given by Rivers Run Red CEO Justin Bovington (see Part One for what he said), a panel of virtual world and music industry bigwigs discussed some of the issues raised.

One thing was clear: the people using Second Life and playing online games are far from the stereotype of lonely, geeky males. “What I see is incredible,” said Roo Reynolds, who works as a metaverse evangelist (no, really) at IBM.

“It ranges from 48-50% female in some worlds, up to 60-66% in some of the games. You would assume it’s geeky males, but it seems not to be. The idea that in a virtual world you’re a creator as well as a builder seems to have huge appeal.”

Why does IBM need a metaverse evangelist anyway? Apparently it’s partly because of the whole boom around virtual worlds and avatars, but also because IBM sees serious business applications in it, like holding meetings and collaboration within virtual spaces.

Also on the panel was Daniel Heaf, interactive editor at Radio 1, and the man behind the station’s Second Life incarnation of the One Big Weekend festival, which happened earlier this year. He said that the Beeb sees something like Second Life as sitting in between live events and broadcasts.

“The event itself is something we invite 35,000 young people to come for free and see bands they love, in an area where live music doesn’t tend to happen,” he said. “Then we have the radio broadcast, where you listen to it in your car or wherever. I wanted it [the Second Life version] to have a real-life feel with the social elements of chatting to people, and interacting with stars and DJs. It’s trying to bridge that gap between the broadcast and the event.” 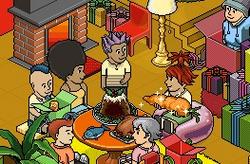 One of the problems of Second Life and other virtual worlds at the moment is that they struggle to cope if thousands of users all descend on the same place at the same time. Apparently Radio 1 had virtual bouncers at the virtual One Big Weekend, while Habbo Hotel, another virtual world (albeit more pixelly-isometric than Second Life) has come up with its own solution to coping with demand.

“On Monday we had Jamelia in our UK hotel, and there’s only so many people you can have in the room without the conversation breaking up,” he said. “They are all 13-16 year-old teens, after all – everyone wants their say! So we created a spectator mode, so that if the room is full with 100 to 125 people, you can either join the queue, or you can enter spectator mode, where you can’t talk, but you can see everything that’s going on.”

Although a number of record labels and music brands have been doing stuff within Second Life, it seems there’s still some people waiting to see if the hype is truly justified. Like Barney Wragg, global head of digital at EMI Music, who was also on the panel, and pointed out that having to send £100,000 on building a proper presence in Second Life is a major investment in these early days.

“As a label, how do we effectively use this as a promotional or commercial tool?” he asked. “Some amazing things have been done there by people like Adidas and Reebok, but we see other labels diving in buying up big chunks of land, building clubs and doing stuff. But they’ve got no idea how to utilise this. It’s obviously incredibly important – look at the huge amounts of people spending huge amounts of their spare time doing it – but do we have a defined picture of what it will end up looking like? I think it’s too early to say.”

Interestingly, it seems there could be a row brewing in the future if people within virtual worlds like Second Life are making money out of real-world bands, whether it’s by making virtual bootleg t-shirts or streaming music into the game world.

At the debate, Wragg was pretty stern when someone suggested that the reason people make virtual bootleg items is because nobody’s supplying official stuff. His view: that’s not a justifiable reason for making money off someone else’s intellectual property.

Other stuff at the debate: Habbo Hotel is doing some pretty neat things around music, for example creating Habbo Radio, which is a 24-hour in-world radio station whose playlist is voted for by users. The company has also been talking to record labels about having some kind of virtual jukebox item which users can buy for their Habbo rooms, and then put in virtual coins to hear tracks from different artists.

I wondered whether there’s an issue in Second Life of friction between the old veterans of the world, and the new incomers. Or even between the veterans and the flood of brands looking to get involved. On the one hand, panellists said no, people rub along nicely.

Yet Justin Bovington also mentioned an organisation called the SLAA which goes around trying to disrupt branded stuff within Second Life, albeit often with the result of increasing sales and surrounding promotion.

“Those things are issues,” said Roo Reynolds. “When Disney first came in to Second Life, there was uproar. People hated the idea. Yet when it came, it was very successful. Brands have an important place in this world. There are 20-30 different subcultures and communities in Second Life, and it would be foolish to ignore them. But I think people realise the thing that’s driven its popularity recently has been the big brands and big events coming in.”