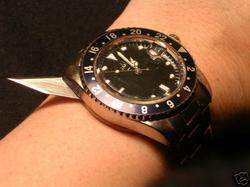 Weirdly, Casino Royale isn’t that big on the futuristic spy gadgets. I guess they preferred to go for the easy product placement deals with phones and cars you can buy now instead. Ah well.

If you’re misty-eyed about the good old days, check out the three spy watches that Bayraider has found today. Made for a film that never made it into production, they’re replica Rolexes, each with a cool spy gadget. One has a flick-out razor blade, another has a garrote, and the third has a secret lockpicking/GPS compartment.