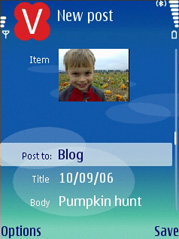 Those of us at Shiny who are keen users of Six Apart’s Vox service have been waiting for this for a long time, but it’s finally here. Vox – blogging meets social networking, basically – has always allowed users to post from their mobile phones, but it involved sending text and pics to an email address, and was slightly clunky.

However, Six Apart has just released a proper mobile Vox application, which sits on your phone and makes the whole process more seamless. It’s available for Windows Mobile, Series 60 and Palm OS smartphones at the moment – the screenshots in this post are from the Series 60 version.

I downloaded it last night, and am VERY impressed, if you’ve got the company’s existing mobile app for Typepad, it’s pretty similar. First impressions follow, along with instructions on how to get the Vox Mobile application.

It installed first time on my T-Mobile Vario II – and my advice is if you’re going to be using this kind of application, you really want to be on an unlimited data plan, like that operator’s web’n’walk. The first time you load it up, you’re prompted for your Vox username and password, but after that it remembers you. 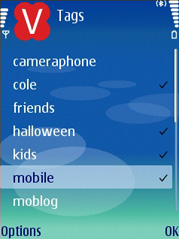 The user interface is clean and clear, and setting up a post is simple. Clicking on the image box at the top right pulls in photos from elsewhere on your phone, making moblogging a painless affair. You can tweak the options too, for example to auto-resize your images to 640 pixels wide before uploading them, and also to be automatically prompted whenever you take a photo, to see if you want to upload it to Vox.

More importantly, posts look good once uploaded – they don’t look a mess when you come back later and browse them on the Web. I’m certainly going to be using it a helluva lot, although as I said, the data tariff is important, otherwise you’ll get stung by your operator. The Vario II’s a good handset too, as it has a slide-out QWERTY keyboard, which makes typing easier…

To try Vox Mobile out, you’ll need to sign up for a Vox account first. You can download the application to your PC/Mac and then transfer it by synching or Bluetooth, but I found the simpler way was to get it direct from my handset. If you want to do that, enter the links below in your phone’s web browser, according to what you’ve got: