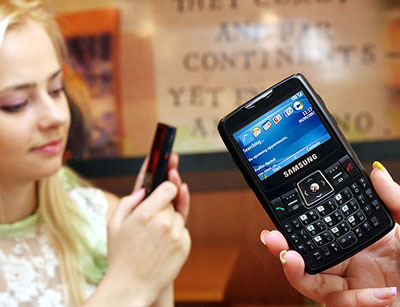 Smartphones, and in particular Windows Mobile have something of a reputation for being a little bit bulky, heavy and quite often ugly. Samsung has had a good run of Windows Mobile devices over last year, but this latest smartphone, the i320, is something a little different. It has to be one of the slimmest, sleekest Windows Mobile handsets to date boasting an ultra-skinny 11.5mm thickness.

It also has a full QWERTY keyboard, a 2.2” widescreen display and a 1.3 megapixel camera while still retaining a very practical form factor and weight of just 95g. Internal memory is around 120MB and with the opportunity for expansion coming from a MicroSD slot. Connectivity includes USB, Infrared, Bluetooth, GPRS and EDGE.

The combination of the keyboard layout, push email and feel of the handset also give it an impression of being much more like a Blackberry than most Windows Mobile devices I have seen, but with the addition of Windows Media Player it has a bit more capacity for entertainment than your average smartphone.

Fitting the full QWERTY keyboard on such a small device did not come without a cost in terms of button size, but despite this I found that typing was certainly still possible using the tips of both thumbs. Most of your typing will be for emails and texts, because, while Samsung has included the relatively useful Picsel viewer for accessing Word documents, Excel spreadsheets and Powerpoint presentations, there’s no Office tools to edit any of the above.

Other strengths included Samsung’s slight tweaking of the Windows Mobile on-screen layout, plus you can select from quite a few different styles until you find one that seems most logical to you. This means many of the most immediately important functions can be accessed quickly from the main screen, without needing to navigate through too many other menus.

The camera also took some very impressive pics for its size and thanks to the large, clear and bright 320×240 pixels, 262k colour LCD, look very impressive on the screen.

Although the keyboard is easy to use when needed, the more important directional keys, soft buttons and navigation controls are not so well laid out. In fact I developed a very irritating habit of missing the right soft-key and hitting the ‘back’ key instead, often undoing everything I had been typing.

Other things have been sacrificed to squeeze all the goodies into the skinny chassis; there’s no Wi-Fi or 3G – something that is now almost essential on a Windows Mobile. Furthermore the battery life is pretty weak and with regular use, will probably need an urgent recharge after a single day or so. However, Samsung has at least acknowledged this as a problem and taken steps to rectify it – you get a spare battery packaged with the handset, and it comes in a handy case that can be plugged straight into the charger so you can swap them with minimal interruption.

Finally, for some reason the memory card slot has been hidden behind the battery. Phone technology has allowed for the removal and swapping of memory cards while the handset is still powered up for quite some time now, so this seems a bit of an unforgivable oversight. And even more so when you discover that the SIM card slot stands apart from the battery meaning you can (theoretically) swap your SIM in and out at will.

Aside from a weak battery and a couple of minor design annoyances, it is hard to pin down why I don’t like the Samsung i320. It is impressively thin, light on the pocket and easy on the eye, but I just think you’re sacrificing a little too much for that slim form factor. The i320’s rivals such as the Sony Ericsson M600i or the HTC S620 Smartphone show just how much more a slightly bulkier device can offer and at a lower price.

In the end, it really comes down to personal preference as there is little to seriously lament and, at the same time, little to really shout about either. But if you think it could be for you, it is priced at a competitive £329.95 to buy it outright, or probably cheaper on contracts.