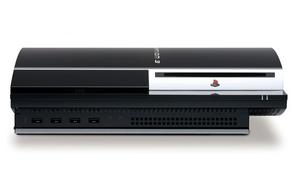 Yesterday, we examined some of the physical design of Sony’s latest console from reports coming in from those lucky few across the pond who have managed to secure themselves a console, get it home without being mugged and drag themselves away from it long enough to share their opinions with the rest of us.

So what happens once you’ve actually plugged it in and turned it on (apart from realising you have go back out and buy yourself an HDMI cable)? Check out the full summary on the turn.

The step to the next generation has put a much greater emphasis on the console to act as an entertainment device by itself. Even the Nintendo Wii, while reassuring us that it is still all about the games, has things like the photo viewer, news channel and internet browser to keep you entertained when not playing a game. Sony has long been shouting about the merits of the PS3 as more of a home entertainment system, than just a games console. You can therefore use the PS3 to play movies, listen to and organise your music, store and display digital photos and browse the web.

The interface is based very closely on the cross media bar, or XMB, pioneered in the PSP which uses distinctive icons in horizontal configuration to guide you towards the various functions. Like its portable counterpart, these also have the same neat thumbnails to show photo previews, album artwork and even short looping clips of the video files.

Format support seems to be pretty generous. Music includes MP3, MP4, WAV, AAC and ATRAC file types although there have been some gripes about how some amount of file organisation is required to get the best results. The biggest whinge with the music system, however, is something that the 360 has got right already – you can’t leave tracks playing in the background and then drop in and out of games without it stopping automatically, which will probably prove to be a bit of a pain – although it could theoretically be fixed later with a firmware upgrade.

Ripping music to the console’s hard drive does seem to be a bit better than Microsoft’s rival device offers though, as you can choose between AAC (128 kbps), MP3 and ATRAC file formats as you prefer.

Video format support consists of MP4 and MPG on top ordinary DVDs and Blu-ray discs with a small selection of viewing modes. This digital support even goes as far as XviD and DivX codecs, which is pretty much ideal should you happen to indulge in, ahem, internet file sharing, you scurvy pirates, you.

Needless to say, none of Microsoft’s audio and video formats are compatible; hardly a surprise, but as PC World Canada points out that is going to a problem if you regularly use a digital music service that uses the WMA format.

The Blu-ray player itself has received overwhelmingly positive feedback from users so far, mainly because it compares very favourably to the more expensive Samsung BD-P1000, which is probably reason enough for HD fans to seriously consider getting the console. And it even plays BD-ROM, BD-R and BD-RE media so you can record your own Blu-ray discs for playback.

Unfortunately, one failing is that there’s no remote packaged with the system, which is a shame but, in fact, it hasn’t even hit shelves in the US yet. However, it should definitely be available by the time the PS3 reaches the UK.

Browsing and the PlayStation Network

The PS3 includes an internet browser as standard and this includes full support for things like Flash (and YouTube definitely works). However, by many accounts the service is pretty slow, repeatedly prompts you to accept certain types of content and generally feels like it hasn’t been properly finished yet. Again this could be solved by a simple software update, but it seems increasingly likely that the Nintendo Wii’s forthcoming Opera browser will have the edge on it.

To use the PlayStation Store and manage your friends list, you have to sign up for a PlayStation account. The process is apparently reasonably straight forward, but takes a little longer than it does on the 360, but once you have it you can start browsing and downloading a host of media content ranging from game demos and arcade games to movie trailers and music.

Like the browser, it seems like the Store has some way to go before it really makes much of an impact and plenty of people have bemoaned the lack of background downloads, which basically forces you to watch a progress bar while you wait, rather than letting you continue to browse.

The friends list seems to be similarly clunky because Sony has not followed Microsoft’s lead by creating one coherent system but instead relying on individual games to keep track of player stats, etc. You can voice chat, video chat and leave each other text messages (note though that most say it is worth having a USB keyboard on standby for this), but it does lack smooth game invites system.

While it seems clear that the PS3’s interface has a fair number of creases to iron out before everyone is truly satisfied, there’s still plenty of potential for the system to evolve. It is also appears that Sony is happy to let you do things your way, unlike the 360, which currently enjoys a more polished, but constrictive system.

The clearest example of this is in the settings, where you can find a function that lets you load up a completely different operating system. It was well known that the PS3 was set to use a Linux based OS, and that meant a field day for tweakers and modders, but Sony seems to have gone one step further than expectations. The scope for adapting your system is therefore unparalleled in any other console and it seems likely that it is only a matter of time before the PS3 is able to run Windows or Mac OS X (assuming you’d want to). As it stands, less than a week after launch some intrepid Linux fan has already managed to get Fedora Linux up and running on the console.

One thought on “First PS3 impressions emerge – part 2: the system”