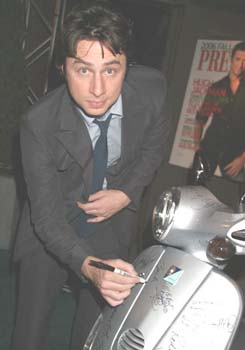 Vespas are cool, and even cooler if they’ve been signed by a parade of celebrities. This pair of scooters has been scribbled on by Jennifer Lopez, Samuel L. Jackson, Penelope Cruz, Zach Braff and Megadeth among others, and they’re now being flogged by MTV on eBay with all proceeds going to the broadcaster’s AIDS charity. The starting price is just $10,000, too. Also today on Bayraider: a glass chip from James Dean’s death car, and a signed Nickelback drumstick.