Hotmail is finally ready to be killed off in favour of Microsoft's new-look Outlook.com webmail service, with Outlook leaving its "preview" period ready for Hotmail users to migrate to. It should be a painless process for existing Hotmail users, who…

Hotmail users will soon see a new version of the webmail service roll out to their accounts, as Microsoft set out to rid our email accounts of "greymail". The update includes categories and more advanced folder management, newsletter filters and…

Yahoo! are giving their webmail client a bit of an overhaul today. Stating the new-look Yahoo! Mail service has had a "social infusion", the team are describing it as as "the best Yahoo Mail ever". Users can now respond…

Well, this morning I descended into the depths of Yahoo! HQ in central London to meet the Head of Mail for Europe, David McDowell. We spoke wide-rangingly, but most of the chat focused on extra detail on what will be happening to Yahoo! Mail in the next two months or so.

It turns out that the introduction of a new, slick, interface proved unpopular with users. The javascript-heavy frontend might have proved usable when running locally, but on many users’ PCs it crawled. Yahoo! started losing marketshare, dipping down several percentage points, which in the mature market of email means trouble.

So, acting nimbly, the big Y! jumped into action, stripping down the features and lightening the application considerably. Out went the snazzy RSS reader that less than one percent of people actually used. A vocal minority complained, but the users started to trickle back. They also put a lot of work into speeding up the code and now Yahoo! is back to 39% marketshare – higher than it’s been in a year.

Why didn’t people like RSS? McDowell is non-committal: “It boils down to narrowcast and broadcast. Most people will tell you that they like customisation and personalisation, but most people will not make the (time) investment to make that happen”. Yahoo found that people couldn’t be bothered to set it up.

But they haven’t given up on RSS. I suggested that the company should use the ‘social graph’ that it has for each user – where it can work out who a user’s friends are by how much they interact with different people – to suggest relevant blog content. “The user says: if you can (set up an RSS feed) on my behalf, in a transparent way,” McDowell concurred, “then that would be very beneficial”.

We also talked about mobile. Somewhere between 15 and 20 percent of Yahoo! Mail’s users take advantage of the wide range of mobile clients available to access their email on the go.

Yahoo! wants to pump that up, though, and users will soon have the ability to visit a website on their phones where the company can auto-detect the best experience they’ll be able to get, and point them to the relevant bit of the site. People with smartphones will get downloadable apps, but less capable handsets will be pointed to the HTML version.

Lastly I asked McDowell about a couple of common complaints about Yahoo! Mail’s service. Firstly that the screen resolution limits are too restrictive – users of netbooks with resolutions below 1024×768 can’t get the shiny new interface and have to use the ancient HTML version.

Apparently the company aren’t too bothered about that – seeing it more as a feature: “The application is like a desktop application. So, if the resolution gets too small then the elements just merge and you can’t see what’s going on,” McDowell continued, “We’re the only big email provider to offer two distinct products – they meet two different sets of needs.”

Secondly, I asked why users were forced to choose between .com and .co.uk addresses – with many wanting to receive UK content on most of the site, but sticking with a .com address because it’s easier for people to remember. McDowell acknowledged that this was an issue and they’re addressing it:

“Coming up very soon, users will be able to register .com addresses but still get UK content, and then they’ll be able to go into options and choose if they want any email that’s sent to [email protected]”.

That’s a great step forward for usability, especially as it’s currently impossible to register a .com address if you’ve already got the corresponding .co.uk.

Yahoo!’s working on bringing users a smarter, faster and more social inbox. It’s still a very ‘traditional’ approach to email, especially when compared to GMails tags, conversational threading and labs features, but it’s probably the best ‘traditional’ webmail client out there. It doesn’t scan messages for advertising reasons, unlike Google, it offers fully infinite storage and McDowell is adamant that people still like filing emails into folders.

I’m not about to jump and go grab a Yahoo! mail account – I’m very happy with my GMail – but if you’ve tried Google’s client and you didn’t like it, then Yahoo! is probably the next best thing. It’s just a shame that Yahoo!’s userbase isn’t really ready for RSS yet.

Yahoo, Hotmail and Gmail will all be a little on the worried side this morning as the news broke overnight that social networking giant MySpace is launching a webmail service.

All MySpace users will be automatically assigned an inbox on the service, guaranteeing the site 125 million active users at launch – more than Gmail and AOL Mail, but fewer than Hotmail or Yahoo Mail. Let’s hope the interface is a little better than the terrible messaging service currently integrated into MySpace.

Yet more new features for everyone’s favourite webmail client, Google Mail. This time, the team has enabled video and voice chatting on the service, which joins SMS, OpenID, Calendar and Doc gadgets and emoticon support on the feature list.

Google’s going to be rolling out the new functionality over the course of today, so if you can’t get it yet, then try again a little later. To get to it, you’ll need to install a small plugin, which you can pick up here, and then it’ll appear in the bottom of your chat windows.

Let us know in the comments how it performs on your broadband connection, and how you think it compares to similar services, like Skype.

There are few things in life more annoying than those Smiley Central flash ads that go “helloooo” and “omg! no way!” when you mouse over them. Especially when your speakers are up and the rest of the office laughs at you. We’ve all been there…

Yahoo! has announced the introduction of its ymail.com domain, which will allow a whole new range of email addresses to be registered. From tomorrow, new and existing users can join in the bun fight and try to grab a more memorable email address, as well as still having access to unlimited storage, integrated Instant Messaging, spam protection, and an ID that works across all of Yahoo!’s other services… 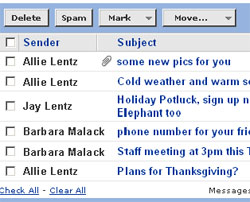 The New York Times’ Bits blog has an interesting piece about Google and Yahoo’s plans to turn their webmail services (Gmail and Yahoo Mail respectively) into fully fledged social networks.

In a first for a web-based email service (unless you know different), Yahoo! is to offer unlimited email storage to all of its users. It comes as Yahoo! reaches the ripe old age of 10. That's a long time online….