Half of British workers don’t want to return to office, claims survey

Google and Bing get Twitter, Jeeves gets new wallpaper…

I’ve never heard of a lapjack in my life. In fact, I have a feeling Toshiba has just invented them, but brand anything with the new Star Trek film and you’ve got my attention. Apparently, they’re “highly-durable, good-quality skins that enable you to personalise your laptop, as well as adding an extra layer of protection”. They seem to be some kind of photo-quality sticker. Maybe a bit thicker than your average. Maybe not.

Anyway, this is all part of a deal that Tosh has got with the Star Trek picture that also involves downloads, such as the wallpaper after the jump, and a competition that you’ll automatically enter when you buy certain Toshiba goodies that you find on the dedicated Trek/Tech site. See what I did there?

The winner gets a trip out to Vegas where they’ll be able to experience the dream of weightlessness through the simulator aircraft known as G-Force One. Now, if memory serves, that’s a stripped out Boeing 727-200 affectionately known in the movie trade as the Vomit Comet which goes up very high and then drops into virtual free fall. Good luck with that one.

Instead, if you prefer your semi-digested food on the inside, then just head over and pick yourself up some wallpaper. Enjoy.

I know! £50! I couldn’t believe it either. Seriously, what are you going to use this thing for? Especially as it plugs in to mains power. If you can think of a situation where this would be a lifesaver, and a cheap pair of travel speakers wouldn’t, then let us know in the comments.

If this photo, above, isn’t the most compelling argument for purchasing an ASUS Eee PC notebook, then I don’t know what is.

Look! Using the Eee turns one thigh into two! You’ll magically find overnight that your left thigh will have a circumference the size of a breadstick. Just £219.95, and you don’t even have to do any leg presses down at the gym!

The aspirational thinsperation photo is available at I4U News in a downloadable 800 x 480 wallpaper…. 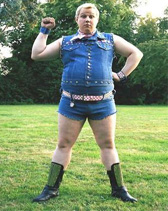 An official Little Britain mobile game? Champagne! Champagne for everyone, as Bubbles would say.

Glu Mobile will be developing the game for handsets, which will consist of four mini-games, using the voices of Matt Lucas, David Walliams and Tom Baker for all the characters from the show. It’ll come bundled…

No, not the sort of wallpaper you stick on your wall – B&Q can rest easy – but rather digital wallpaper and phone graphics that certain companies take great pride in selling for extortionate prices. People are instead using their…

iStockphoto, which is the world's most visited stock imagery and video site, has partnered with AMUSE Entertainment Group, to allow a selection of its stock photography to be used by mobile phone users. A pilot phase is being launched in…