First till-free Amazon Go store to launch in the UK

Is VW about to launch convertible ID.3 electric vehicle?

I haven’t exactly hidden my contempt in the past for Doug Morris, CEO of Universal Music Group. For many years, UMG has ridden the coattails of the other record labels, particularly the trailblazing EMI, when it came to digital music. It was with mild trepidation, therefore, that I began to read Cnet’s interview with UMG’s Digital Music head honcho, Rio Caraeff.

There are a number of interesting nuggets of info in the interview – that Android’s driving “a ton” of sales for Amazon MP3, that litigation is not “a definitive or long-term fix” for piracy, and another confirmation of the “tens of millions of dollars” that Rio had previously claimed the label was getting from YouTube.

Most interesting of all, though, is the way that Rio sounds like a guy who’s really got his head screwed on. He speaks very knowledgably about digital music, but the most telling statement is when he says “We’re trying new things constantly. There is nothing we won’t try.” Trying new stuff was one of the central themes of my Six Tenets series about how the next generation of music companies will work. Good to hear someone so high up in the ‘traditional’ industry echo those sentiments.

We’ve written about Total Music before – it’s an idea cooked up by record label Universal Music Group, which involves consumers getting music for free as part of an unlimited subscription, with the costs being footed by the manufacturers of mobile phones, MP3 players or ISPs. 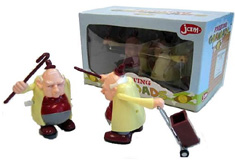 Morris recently refused to sign up for another contract with Apple allowing their record label’s music on iTunes, due to their strict contract terms which apparently limit the company’s marketing and the fact that Apple takes 29 cents of every 99 cents paid per song owned by UMG. Instead of pulling out of Apple…

Microsoft and Universal Music Group have struck a deal whereby not only do UMG and their artists get royalties from music sold in the Zune Marketplace, but also a proportion of the sale of the Zune player itself. Microsoft is…