Doug Morris, pictured over the jump, is the chairman of Universal Music – the biggest record label in the world. His contract has just been renewed, but given that the recorded music industry is in freefall and he’s admitted in the past that “there’s no one in the record company that’s a technologist”, is he really the right person to be heading up the careers of artists like The Killers, Elbow and Girls Aloud?

I say no. Morris has a long history in the industry – he headed up Warner Music before moving to Universal – but at the moment, one of the biggest issues with record companies face is that the old, traditional way of doing things simply doesn’t work anymore. 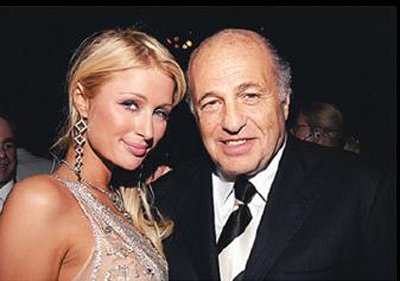 Last year, Doug Morris participated in a disastrous interview with Wired magazine. In that interview, he admitted that “I wouldn’t be able to recognize a good technology person — anyone with a good bullshit story would have gotten past me”.

Since then, he’s laid into Wired, accusing them of ridiculing him unnecessarily. Assuming he said the things he said, though, Morris doesn’t need any extra ridiculing. He does a pretty good job himself. He paints a picture of being a man that understands how to sell plastic discs, but has no idea how to cope with instantaneous digital distribution, file-sharing and vast music collections streamable from anywhere.

The way the general public consumes music has dramatically changed in the last ten years. In 1998, music industry revenues peaked, but since then they’ve been in steady freefall, with digital revenues not nearly making up the shortfall.

Number one reason for this was the industry’s attitude towards file-sharing and piracy – suing their customers, while not providing any compelling alternatives. From Doug Morris’ point of view, the internet must be like a hydra. As soon as they remove the head of any one download service, ten others spring up.

Yet more people are listening to music than ever before. MP3 blogs and aggregators expose new bands to the mainstream in a way that commercial radio – the traditional route – utterly fails to do. Bittorrent is one of the most efficient digital distribution services that the world has ever seen. Both are very questionably legal, but both let people experience music more easily than they’ve ever previously been able to.

It’s that ease-of-use that people love. Why should they have to slog down to the local HMV, or battle with competing DRM systems on different websites and players? The alternative is to log on to the Pirate Bay, and get a full album in a format they can do whatever they want with, that comes with full metadata, in a matter of minutes.

EMI has the right idea. Guy Hands recently took over as Chairman at the top of the British-based major label. He immediately announced plans to cut thousands of jobs, particularly in the A&R departments, and questioned whether EMI’s payments to the hated RIAA, BPI and IFPI were worth it.

Guy Hands is attempting to change the industry, but you can’t do that without breaking a few eggs. He hasn’t gone down well with staff (understandably) or with artists – Robbie Williams is currently “on strike” over the matter. But at the end of the day, the record industry can’t continue its current trajectory. It needs people like Guy Hands, who don’t come from a music background, to change things.

Which is why it baffles me why Doug Morris’ tenure at Universal has just been extended. For a man approaching his 70th birthday, he’s perhaps more cogent than many septuagenarians, but is still hopelessly out of touch with the demands of the 21st century music industry.

The industry needs new leadership that understands the challenges of digital music, and the best ways to leverage the power that it has. Few people *want* to pirate music. They just want to get things easily at a price closer to the true cost of distribution. People love music, but they hate the people who make that music happen.

Doug Morris, based not on his age, but simply on Universal’s behaviour and the comments he’s made, is not the right man to lead a major record label in 2008. Sure, in 1995 he’d have made an excellent choice, but in an industry that needs innovation, Morris only brings stagnation.