Meet Gia. Gia is an Irish Water Spaniel, and she’s not the first dog to be re-homed via Twitter. But she nearly was. Let me explain further.

It started with a tweet from @dogstrust, reading “Irish Water Spaniel or classic pic of Kevin Keegan? http://www.tinyurl.com/6g69mx“. One follower replied, whose mum was considering getting a dog. She lived near Dogs Trust Ballymena, so after doing a little bit of research, headed over to the centre that afternoon.

They checked out Gia, and after finding her a little “big and hyper”, instead picked up a Pomeranian cross called Suzie. Suzie moved in today. It’s the first time any animal charity has successfully used Twitter to re-home an animal, so congratulations, Dogs Trust! Gia’s still looking for a home, so if you like what you see above, get in touch! 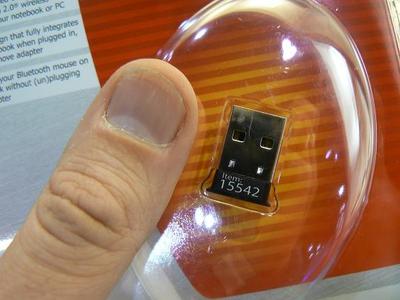 And I mean tiny: check it out. No, I don’t have giant freakthumbs. Trust International is showing it off at CES. And, er, there isn’t much more I can say about it until they release pricing and availability details. But still, innit small, eh?