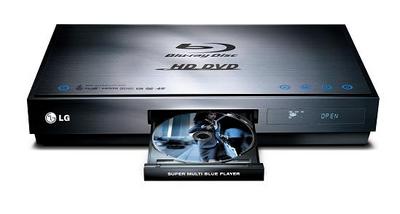 We got quite flustered over LG’s BH100 Super Multi Blu player (pictured) when it was announced at CES this year, what with it offering a solution (a very expensive solution, admittedly) to the dilemma over whether to choose Blu-ray or HD DVD.

However, LG has just announced the follow-up BH200 product, which is due to go on sale next month in the US for around $1,000.

There’s been something of a price war between rival HD DVD and Blu-ray player manufacturers of late, but until now, dual format players haven’t followed suit.

This may be in response to Samsung’s recent announcement of their BDP-UP5000 player, expected to retail for around $1,049.