Representatives from social media giants Facebook, Google, Snapchat and Instagram have been summoned by the Government to meet the Samaritans over plans to rid the internet of content promoting self-harm videos and suicide Health Secretary Matt Hancock has convened the summit and will ask tech giants to commit to developing ways that might identify and…
29th April 201929th April 2019 Chris Price News, Social Media

Instagram boss Adam Mosseri has said the social media platform is “not yet where it needs to be” on its handling of content around self-harm and suicide. The head of the Facebook-owned platform said a comprehensive review had been launched by the firm into its policies around such content, and it would begin adding “sensitivity…
4th February 201912th February 2019 Chris Price Instagram, News

A 15 year old boy has killed his mother and committed suicide after a row over online gaming escalated into violence. The unnamed student from Seoul, South Korea had got into a fight with his mother on Monday night after…

An unnamed 17-year-old was taken into police custody the other day in Ohio, following a threat that he’d commit suicide to an in-game Blizzard representative (known as a GM). The staffer contacted local emergency services, who showed up at the kid’s house.

The kid told the GM that “he was suicidal and the game was the only thing he had to live for”. Other people have tried stuff like that on Blizzard before, but this is the first time that someone’s been arrested over it.

Okay, so this isn’t the most pleasant piece of art in the world, but it’s sorta cool. It’s a light-up hanging noose. Just the thing to go with your Joy Division albums. Odds are that it wouldn’t support the weight of a human, but it might electrocute you in the process, if you’re inclined to give it a try…

Sadly, an 16-year-old Indian girl took the fears of an all-encompassing black hole being formed by the Large Hadron Collider, and took her life instead of carrying on as normal as the rest of us have.

On the scheme of things, if there was even the remotest possibility of being annihilated by a lethal black hole sucking, I’d rather die that way than fairly unpleasantly by drinking pesticide. I guess the girl believed that suicide is painless.

In related news, the Royal Society of Chemistry has launched a competition to find a new, more meaningful, name for the LHC. Dr Richard Pike said that it “fails to reflect the drama of its mission, or the inspiration it should be conveying to the wider public….

Here’s something sad and depressing to get you in the mood for a weekend of sitting inside watching TV and being miserable.

49-year-old mother Lori Drew allegedly created a fake MySpace account under the pretence of being a 16-year-old boy. Lori is alleged to have then befriended 13-year-old neighbour Megan Meier while pretending to be the boy, formed an online relationship… 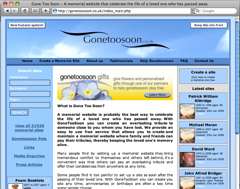 My Tech Digest columns are usually fairly whimsical, so this one has been quite difficult to write. It touches on a sensitive and topical issue which is still being investigated — that of the recent suicides of seven young people in and around Bridgend, South Wales.

None of us know — and perhaps we’ll never know — exactly what motivated those teenagers to take their own lives, and I’m not for one moment suggesting that the Internet couldn’t have played a role in it, if indeed those suicides are connected in some way. However, many other methods of communication could also have contributed to them.

The local MP, Madeleine Moon, is rightly concerned, but has hit out at memorial web sites which she claims “romanticise death”.

“What is concerning is that you’re getting Internet bereavement walls. That’s not going to help anyone,” she told the Reuters news agency.

I’m sorry, Ms Moon, but that is a gross oversimplification of the situation. While I can’t profess to understand the modern teenager, I am probably of a generation somewhere in between theirs, and yours, and I do understand the positive power of online tributes.

You’ve already been informed of the birthday of the humble emoticon. Well, it seems they’ve had enough of our (fickle web users) ways and now… it’s time for one last “act of desperation”. Good bye cruel (virtual) world