Tech Digest daily roundup: TikTok to limit misinformation ahead of US mid-term elections

Tech Digest daily roundup: Apple staff ‘must be in office 3 days a week’

Gosh, remote control cars have come a long way since I had a Scalextric set back in the 1970s. Robotics and AI company Anki has announced Anki OVERDRIVE: Fast & Furious Edition for its robotic toy car system. Due to launch in September 2017, Anki OVERDRIVE: Fast & Furious Edition will be available for pre-order starting May 16 at…
27th April 201710th May 2019 Chris Price Gadgets, Toys

Scalextric are set to release a Toy Story themed 1:64 scale circuit, just in time for Father's Day and the upcoming release of Disney-Pixar's Toy Story 3 animated movie. Recreating the classic "Falling with style" van chase scene from the…

Scalextric phoned me earlier. If you were a child of a certain part of the late 80s and early 90s, then you’ll immediately be envious. In actual fact, though, all that happened was that my inner eight-year-old immediately took the fore and started babbling excitedly. It was quite embarrassing. All they were trying to tell me is that Scalextric has entered the world of social media.

The company has launched a Facebook application, a YouTube channel and a blog. That wouldn’t normally be terribly exciting news, but the app and the channel seem pretty cool. The Facebook app lets you build a garage of cars that you can send to other people using the app. A few people will also win real-life Scalextric vouchers, so you can fill your real-life garage up with that instead.

The YouTube channel is also pretty awesome. There’s video of Jensen Button playing with the diminutive cars, but also guides on how to replace the contacts under the cars if they get worn, and footage of an attempt at the world record for biggest Scalextric track.

Lastly, the blog. It’s a little clunky, but there’s sections for news about the toys and space for news about motorsports. There’s also a ‘coming soon’ section for technical help on Scalextric builds, which I’m sure will come in handy.

The only thing missing in this list is a Twitter account. What’s that all about, Scalextric? I want to message @scalextric and not have some bloke from Warwickshire reply.

Imagine the fun. Imagine the danger. Imagine the horrendous impact it would have on your electricity bill and the environment. Actually, no, don’t imagine the last one. Just imagine fun and excitement.

Because that’s what those male models are experiencing in this fantastic photograph, and it’s all thanks to the Eight Lane Scalextric – a monster, custom-made car-racing set that’s available for hire right now, should you have a room large enough to accommodate its motorway-sized dimensions…

Unless you happen to be a lower league celebrity, chances are that you’ll not be invited to race a car round a track for the BBC’s Top Gear programme. But you will soon be able to do it in your living room with the Scalextric Powerlaps set. 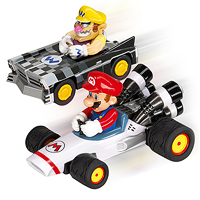 Old-style slot racing thrills with modern-day console characters – that’s what you get with Mario Kart Go. 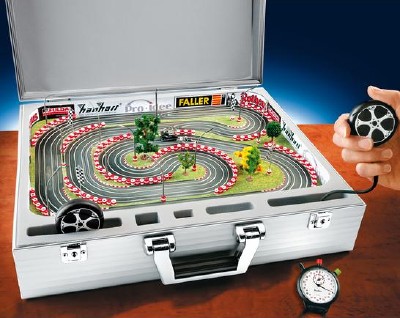