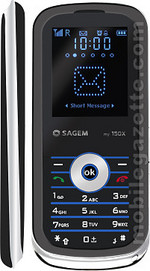 That’s not a typo. Sagem’s new my150x will cost just a tenner with a pay-as-you-go contract on Orange, and is on sale in Asda supermarkets now. That’s less than a bottle of wine (if you’re posh) or three bottles of wine (if you’re not).

That’s without a doubt the cheapest prepay phone ever in the UK. Are you being fobbed off with rubbish features though? The 1.8-inch screen takes its cues from old-skool calculators, so don’t expect to be watching videos or sending picture messages (nope, there’s no camera either).

SAGEM has launched its latest mobile phone, the 10mm thin slimline budget handset featuring "modern design with a retro feel". It features a 1.8-inch screen with NeoNTM technology that lights up the display in blue-tinted light, with information displayed in…