Tech Digest daily roundup: Is your job under threat from a robot?

Ford  is introducing new security technology to its Fiesta and Focus models which prevents illegal hacking of the keyless entry fobs when not in use. Keyless entry fobs of all makes of cars have been targeted by thieves with “relay box” equipment, used to extend the signal from fobs in homes to unlock and start…
10th April 201910th April 2019 Chris Price Car stuff

Right on cue, Microsoft have announced the availability of the Kinect for Windows hardware and Software Development Kit, hitting the February 1st release date that Microsoft boss Steve Ballmer promised at CES. Built for developers as "a fully-tested and…

Microsoft's long awaited motion controller, the Kinect, has finally touched down on UK shores. A motion sensor that tracks 48 joints on your body, there's no longer a need for buttons or control sticks to play games, instead with the…

Puma and Sagem are looking to reveal a health-conscious mobile phone at next week's Mobile World Congress, it has has been revealed. By looking through the source code to the phone's teaser site, Mobile Crunch have unearthed a few interesting…

There’s mixed messages coming out of Microsoft with regards to Xbox developments. First off CEO Steve Ballmer hints that there would be a new Xbox coming out in 2010 with motion sensing Project Natal cameras built-in. Now Microsoft’s Xbox boss, Aaron Greenberg, has stated that there are no plans for a new console.

Greenberg was keen to play down any talk of an entirely new console and insisted that Ballmer wasn’t referring to a new generation Xbox: “We are saying that the Natal will run on the Xbox 360, so there’s no new hardware to purchase. We’re barely halfway through this generation. We’re happy with the Xbox 360, so there are no changes from that standpoint.”

Project Natal was unveiled at E3 at the beginning of June and Microsoft hopes that the technology will allow them to compete with the Wii in terms of motion based games. If they can match the Wii’s fun factor then the Xbox certainly contains the hardware to blow the Japanese firm out of the water. Not literally.

According to an MTV source, Microsoft is not only considering a Wii-remote like accessory for the Xbox 360, it’s getting ready to launch it by the end of this year.

The project has reportedly been in planning since last summer, and legendary developer Rare has been given the responsibility of creating a unified interface and design of the controller…

If you have nothing else to do and happen to live within smelling distance of the urine-soaked alleyways of central London, go check out the Orange store in Carnaby Street.

Tech/design/media agency “The Alternative” has created an interactive window display thing, that uses motion capture – and lets window shoppers browse the currently available Orange mobile phone text/minute packages by waving their arms about in the street like one of London’s particularly crack-addled tramps.

Here is a photo of some slightly confused people wondering what’s happening and what the point of it all is, and probably what’s it’s ever going to be “for”: 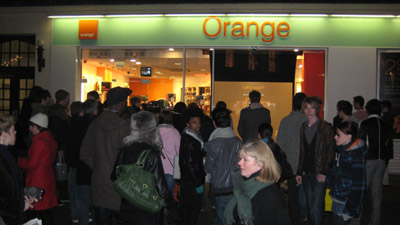