Sent through on the interwires today was a hopeful little story about how 25% of us British folk are going to attempt a green tech Christmas.

It’s actually come via Fujitsu Siemens Computers, who has recently made concerted efforts to become ‘eco-friendly’, with examples such as their Scaleo PC Green Edition laptop impressing those with environmentally-friendly consciences. Get the drift? Fujitsu… 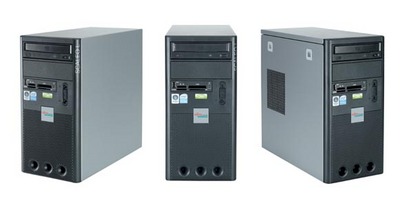 Sadly, Fujitsu Siemens hasn’t opted to make its new eco-friendly computer ACTUALLY green, which would’ve been a neat design touch. So it’s a regular grey-box PC that won’t be causing you sleepless nights over whether to display it in the living room (clue: No).

But its appeal goes beyond mere looks. Apparently, the Green Edition Scaleo’s software has been developed to reduce its power consumption, while its internal citcuit board has been manufactured in an eco-friendly stylee to reduce the PC’s carbon footprint.

Our latest round-up for this week revolves around laptop computers. Or notebooks, if you like to call them by their ‘trendy’ analogue name. I’ve enlisted the help of Katie, so if you’re in the market for a new laptop/notebook, or simply like to dribble at new pieces of kit, take a look at the above video…

Sticking a mobile SIM inside a laptop is an increasingly popular notion – witness Vodafone’s partnerships with the likes of Dell and HP. Now Fujitsu Siemens has announced plans to include T-Mobile’s Web’n’Walk mobile broadband service in its AMILO Pro V3525 notebooks via an embedded SIM.

There is a striking similarity between this and the Mio H610, which hopefully means we'll be seeing a lot more of these diminutive GPS handhelds in the coming year. The N100 also has a very basic, minimaist white design and…

Fujitsu-Siemens have announced an addition to their Amilo range of notebooks with the introduction of the AMILO Pro V3525/V3545 Edition, with built-in UMTS/HSDPA connectivity. Sony announced their Vaio SZ3 notebook with HSDPA last month….