By 2030, 21.8 percent of the UK population will be aged 65 or over,  according to a report by Age UK. The senior population in the UK is growing rapidly thanks to advances in healthcare, and it is not expected to slow down any time soon.   While this is generally good news, one problem…
10th January 2020 Tech Digest Correspondent News

New research conducted by Logitech shows that the next-gen Nan is fed up of receiving boiled sweets and a Paul O' Grady autobiography for Christmas. Gadgets are in this season for geriatrics it seems. OK, the survey was for…

As birth rates and death rates both fall off in Western countries, something that we’re going to have to face up to in the future is a rapidly aging population. Microsoft doesn’t see that as a problem – more of an opportunity to flog some PCs, and it’s teamed up with HP to design computers for the elderly.

Three SeniorPC offerings are currently being tested. They’re targeted at an audience who’s never used email, browsed the internet or used a word processor. As a result, the software included on the PCs are special versions that are greatly simplified, produced by a company called QualiLife.

Windows Vista Home Basic is preloaded onto the machines with a ‘shell’ built over it that makes things easier to locate. A very simplistic browser is included too, as well as a simplified email client and the word processor from Microsoft Works, which is simpler than Office’s Word. It’s possibly to disable the simplistic versions of the software once someone gets more comfortable using it, enabling more advanced features.

Some specialist programs are also pre-loaded. A piece of medication management software called OnTimeRX will let users manage their medication, telling them what to take and when. Family members and physicians can access this to check if medication is being taken. There’s also two memory games – Slide Puzzle and Super Word Slide – that help fight against memory problems.

Hardware-wise, the machines come in both laptop and desktop form factors, with one package including a “BigKeys” keyboard, and a “BigTrack” trackball. They’re good for arthritis sufferers apparently. At the time of delivery, Microsoft will also offer training on any included software and hardware, as well as a year of customer support and internet connectivity.

At the moment, these packages aren’t available in the UK yet, just in the States. I’ve got an email in to Microsoft asking how it’s going and whether we’re likely to see the project in the UK in the near future. I’ll let you know if I hear back.

The robotics section is always a good place for a nose around if you want a few giggles at CES and there was certainly no disappointment this year after I bumped into the Yorisoi ifbot.

Made in Japan, of course, the ifbot is a prototype AI life unit designed as a companion for the elderly. It talks slowly and clearly… 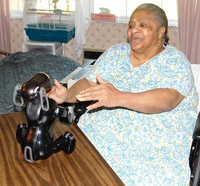 Researchers at Saint Louis University gave one group of old people in nursing homes a proper biological dog made out of bones and meat, then tried a robotic AIBO out to see how the old folks reacted to the two.

They were both, incredibly, received very similarly, with the oldie subjects bonding pretty much equally with the robotic and real doggies… 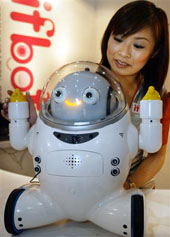 The novelty of $4,300 “communication robot” Ifbot wore off after about a month of active service in a Kyoto nursing home, with elderly residents preferring the silent, unconditional love of teddy bears.

Most old people “see robots as overly-complicated and unpractical” says Ruth Campbell, a social worker in…

The Electronics and Telecommunications Research Institute has designed a mobile phone system for the elderly which can detect if the user has fallen, and take emergency action. The phone needs to be carried on a belt worn by the user….