They are words that all of us have been using for some time now, but now they have been officially recognised as a part of the language. CNET reports that hashtag, selfie and tweep are just three of the latest…

The team at Nokia's Beta Labs have announced news of their new Custom Dictionary app. Soon to be made available exclusively for Nokia Phones, the app will let you manage, edit and customise your texting dictionary , keeping all those…

The word Twitter is to appear in the forthcoming Collins English Dictionary as both a verb and a noun:

The word Twitterati, which refers to the elite users of Twitter, such as Stephen Fry and Ashton Kutcher who attract a large following, will also be entered as will Twitterverse which defines the whole Twitter phenomenon.

Elaine Higgleton, Collins editorial director, said: “Hardly a day goes by when you don’t see some Twitter-related article. Hence I find it entirely unsurprising that this year we have not one Twitter-related entry in the dictionary, but three.”

Every year we see these sorts of stories where the latest fad phrases are entered into the dictionary and every year I get a bit annoyed. Yogalates was added last year. Yogalates. sigh.

I suppose Twitter is a valid entry – but Twitterati and Twitterverse? What’s the point?

Hot on the heels of w00t! being voted “Word of the Year” comes news that “fanboy” has made it into the print version of the Merriam-Webster dictionary, along with 100 other words…

Sharp continues to knock out electronic dictionaries in the far east, but these days, they’re actually quite interesting – including the RD-CX310…

The excitable visitors of Merriam-Webster's website have crowned "w00t" as word of the year. They got to choose from twenty words and phrases picked from those most searched for on the dictionary's site. It's not been included in the print… 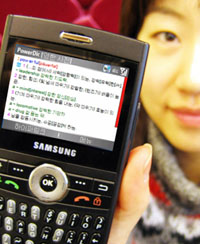 We are quite clearly only mentioning this because of its name.

PowerDic, from Korean company DIOTEK, is just a dictionary, designed to work on Windows Mobile-powered phones. It supports text-to-speech functions, which would be quite funny for five minutes when you get it and make it say all the swear words.