This beautiful cloud represents the entirety of music. Every single artist tracked by Last.fm is marked as a point on the map, and ‘similar’ artists are connected by a grey line. The size of each point reflects the popularity of the artist, and different colours represent different genres.

It’s the creation of Budapest University PhD candidate Nepusz Tamas, who hammered Last.FM’s servers for over a week with a request every five seconds. Unfortunately, the only way to interact with the map is to pinpoint your favourite bands, and you can’t zoom in, but it’s still a beautiful representation of the world’s listening habits.

Reconstructing the structure of the world-wide music scene with Last.fm (via Listening Post)

Related posts: Last.fm gets a makeover – and a few new features | Viacom wins right to sift through YouTube user data, all four terabytes of it

Motorola has just kicked in with a new marketing campaign for its Motozine ZN5 mobile. The phone features a five megapixel camera, developed in conjunction with Kodak, and so Motorola’s recruited eight photographers around the world to capture the essence of the city they live in, using the ZN5.

The photographers had to stay awake for 24 hours taking photos, but the results are surprisingly awesome. There’s a lovely picture of a taxi and a white van at 17:00 in London, and a beautifully muted shot of a railway station in Mumbai at 13:00. The Moscow subway at 01:00 is incredible, too.

Step down 1&1, you no longer have the coolest datacentre. That honour now belongs to Bahnhof, at their Pionen datacentre, buried deep in the bedrock below Stockholm in a former nuclear bunker. I don’t know where to start – it uses submarine engines! It has waterfalls! There’s 1,500,000 Watts of cooling! It can withstand a hit from a nuclear missle!

Click the image below to check it out, before my head explodes from the awesomeness.

(via, and more pictures and info at, Royal Pingdom)

The Brionvega Radiofonografo RR126 was one of the most beautiful pieces of design of the sixties. It contained a radio, amp, dial controls and a phonograph. This is the RR226, which adds a CD and DVD player to the mix, but looks no less gorgeous. The speakers flip over the top, where the record player is, if you’d prefer them to… 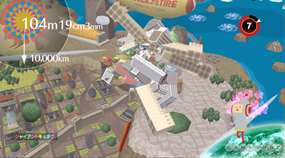 Those rumours that the next Katamari Damacy game, Beautiful Katamari, would be rolled out across all platforms? Well, let’s just say it’s a sad day for the Ninty and Sony fanboys amongst us, as it’s now been confirmed that the next game in the cult-series will be exclusive to the Xbox 360, and may just be an Xbox Live download.

As fellow Shiny site Xboxer pointed out, if the game…