Tim Cook has been speaking to the Wall Street Journal, and has apparently at long last commented on the forthcoming Apple Watch's battery life. Here's how the WSJ quote him: "We think people are going to use it so much you will end up charging it daily," says @tim_cook on Watch battery life pic.twitter.com/wyOZWNtqcJ— Joanna…
28th October 20146th April 2021 James O'Malley Apple, Smartwatches, Wearables

You know what I hate? I hate it when I'm trying to have an intimate, 6 day garden rave with a little DAB radio, only for the batteries to give up the ghost a few hours into my epic party….

Intel have been showing off their new Moorestown mobile processor, now renamed the Intel Atom Z-Series. Thanks to the processor's intelligent power consumption, they believe that they'll be able to offer a phone with ten days worth of battery life…

That’s right – 24 hours. What could you do on a laptop in 24 hours? You could listen to 432 songs, or watch 11 films, or even make money on the internet. Except you probably couldn’t do those things, because published battery life always assumes a computer just sitting there, not doing anything. Using speakers, WiFi or the DVD drive, or anything will drain that battery faster…

If you’ve been scanning the reports online, you might’ve heard the reports that the iPod Touch’s screen isn’t as good as the iPhone, contrary to expectations. Users have been complaining that it’s particularly noticeable when viewing dark photos or videos.

Well, it seems they weren’t making it up. Apple (via influential Wall Street Journal hack Walt Mossberg) has confirmed that some of the initial batch of iPod Touch devices DID have dodgy screens, and are working to sort the problem out. 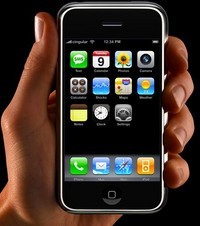 Apple wouldn’t be Apple without springing a few surprise iPhone announcements in the days leading up to its launch. Yesterday’s was a corker too, as the company revealed that the iPhone’s battery life will be longer than expected, while it’ll be more scratch-proof too.