From tribe-based banking to embedded finance and everyday cryptocurrency payments, here’s what to expect in the FinTech industry in the year ahead..

The financial technology sector is rapidly evolving with traditional methods of banking now being replaced with digital solutions, in a bid to make things faster, easier and, hopefully, more streamlined for both businesses and consumers.

As we edge closer towards 2023, FinTech experts from all-in-one financial toolkit, Intergiro, have, in conjunction with TechDigest, made their top predictions for the biggest upcoming trends.

Whilst buy now pay later has raised concern in recent years, the online trend allowing customers to split their payments into interest-free instalments continues to surge.

And although many mainstream banks are steering towards virtual cards, in January 2022 Klarna launched its first physical credit card, allowing customers to pay instore as well as online.

In 2023, although it is expected to further expand, BNPL will be more regulated in the UK, as the government will bring legislation into effect requiring lenders to carry out affordability checks before approving loans. The financial promotion rules for BNPL are also set to change to ensure advertisements are clear and do not mislead consumers.

Searches for ‘BNPL’ have seen a 130% increase since 2017, while the term ‘how does Klarna work’ also shows an upward trend, with global search volume at its highest in December each year for the past five years, just before Christmas when families are faced with extra financial pressure. With the growth of digital banks over the last few years, in 2023 we expect to see the use of virtual cards continue to surge. Since 2017, searches for the digital bank ‘Revolut’ have increased by 143%, now receiving 1.3M monthly searches globally on average.

Looking at Google Trends, we can also see the term ‘virtual card’ has increased 216% in the last five years and is currently at its peak. But how are they being used by businesses?

Nick Root comments: “Hailed as the future of financial spending, virtual cards are the forefront of a revolution in business expenses management.

“Perhaps the biggest reason why virtual cards are increasing in popularity is because they offer more robust security measures, helping eliminate misuse from hackers and fraudsters.

“They also reinvent the way companies handle employee business expenses. Every employee has their own unique card, which means anyone can easily see who is spending what. Funds can also be assigned to team budgets and purchases can even be limited so that nobody spends more than what’s allocated to them.” 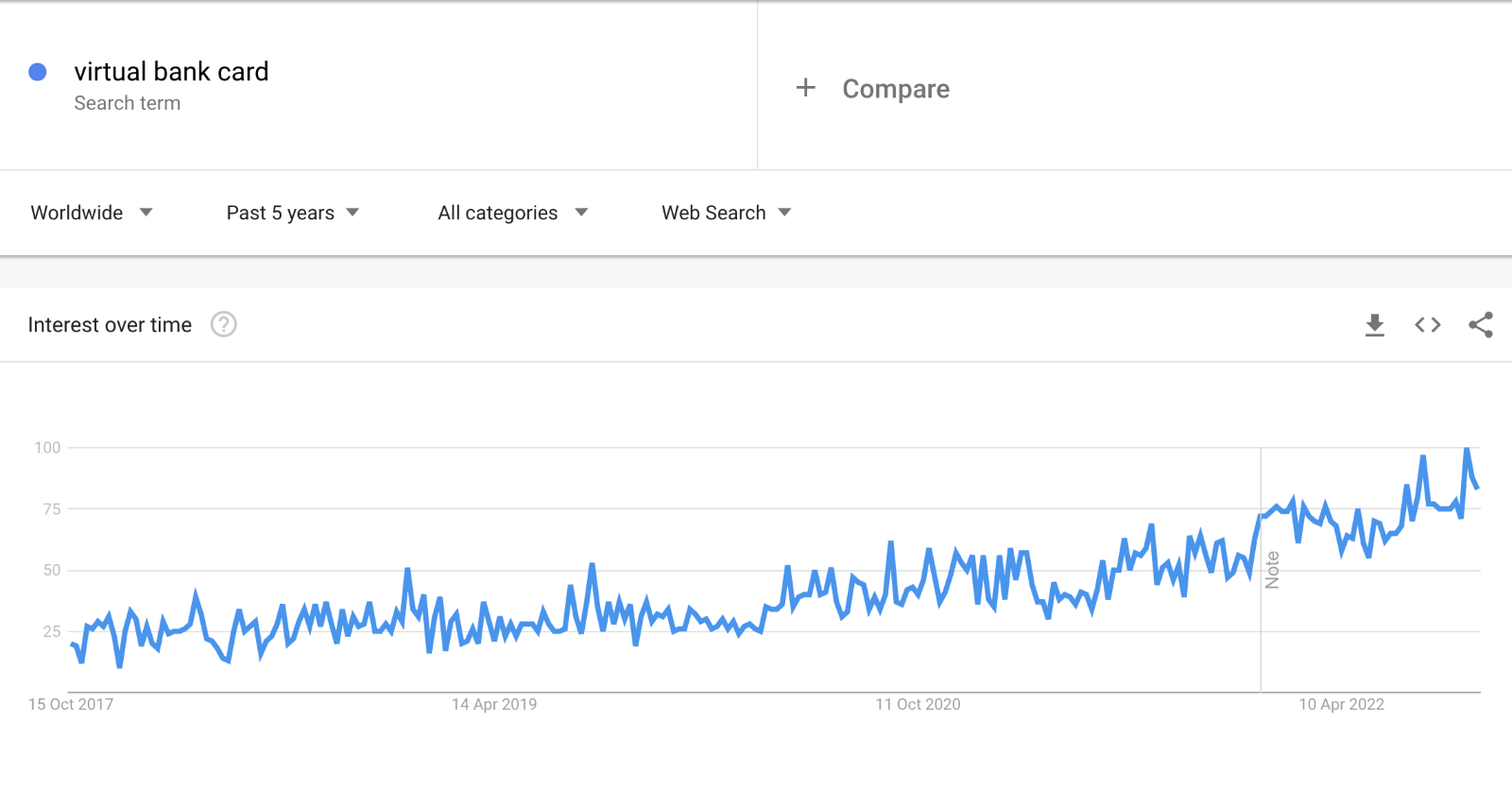 Embedded finance is also expected to grow in 2023, with searches for the term accelerating by a staggering 488% in the last five years. The success of embedded finance will be predominantly down to distribution, trust, and improved user experience.

Alongside this, data shows the term “Banking as a service” has seen 176% global increase, too. Banking as a service defines an ecosystem in which licensed financial institutions offer non-banking companies access to their services, typically through the use of APIs.

“The emergence of API-led banking services means that distribution is no longer an issue. That layer of friction has now been removed, with any digital company being able to offer a financial service without the headache and complexity that offering financial services used to bring.

“What WordPress did for the internet, FinTechs are doing for finance” says Nick Root 4. Cryptocurrency will become an everyday way to pay

In 2023, we expect to see a growing number of financial institutions accept cryptocurrency as a form of payment.

Mastercard recently announced it is keen to start rolling out plans to make crypto an ‘everyday way to pay.’ Acting as a bridge between crypto trading platform Paxos (used by PayPal) and major banks, Mastercard will handle the major roadblocks, including regulatory compliance and finance.

Furthermore, this week, Google also announced a partnership with Coinbase, allowing customers to pay for some cloud services with cryptocurrency in early 2023.

“As more and more people invest in cryptocurrency, businesses are starting to adopt it as a form of payment.”

“The term ‘pay with crypto’ has seen a surge of interest, with searches increasing by 136% since 2017, and with huge firms such as Google jumping on board, in 2023, we predict more banks and financial providers will join them.”

The Internet of Things is making waves in the FinTech sector, allowing consumers to pay for goods and services faster than ever with wearable technology.

Alongside smartphones, bracelets and smartwatches are now being used to make payments instead of a bank card.

The Apple Watch is one wearable that took the world by storm, showcasing an upward trend in 2022. Smart rings are also on the rise, with searches for the revolutionary wearable increasing by 180% globally.

We predict this trend will continue to grow in 2023, and in light of this, fintech companies will increasingly use these connected devices to gather customer insights and make more informed decisions. A fairly new buzzword that you may have heard in 2022 is Regtech – but what is it, and why does it matter?

The rise in digital products means there is an increased risk of data breaches, cyber hacks, and money laundering – but that’s where Regtech comes in. Regtech is a group of organisations that solve challenges arising from a technology-driven automated economy.

The Regtech industry is expected to disrupt the regulatory landscape by providing advanced tech solutions to compliance issues that arise in the FinTech sector.

Despite being coined in 2008, in the last five years, searches for ‘Regtech’ have increased by 184%, and on top of that Grand View Research predicts a 52% growth in the technology market by 2025, giving it a value of $55.28 billion.

AI will also continue to drive infrastructure decisions in the FinTech sector. Chatbots specifically will become more sophisticated and could soon be the future of fintech customer service.

In fact, studies from Juniper Research suggest that successful banking-related chatbot interactions will grow 3,150% between 2019 and 2023, saving banks a lot of time – around 826 million hours to be precise.

Over the last five years, Google searches around the topic have seen significant growth too, with the term ‘AI in banking’ increasing by 104% globally.

The term ‘digital tribe’ has become popular in recent years, used to describe online communities who share a common interest, and are usually connected through social media or other online platforms.

In 2023 and beyond, we predict more businesses will engage with online ‘tribes’ as a way to form deeper connections with consumers.

As such, we also anticipate more businesses launching their own financial services centred around the tribes they are connected with.

“In the past, people from diverse communities have been uncomfortable with legacy banks because they have not been represented, don’t feel empathised with, and aren’t open to communication.

“In this new era, banks need to be more authentic and receptive to communication. People from these communities will soon be looking for a bank that gives them a sense of representation and openness.”