The ongoing geopolitical situation and rising inflationary pressure continue to impact the technology sector with 24 of the top 25 technology companies reporting a combined loss of $3.3 trillion in their market capitalization (MCap) in Q2 2022, found GlobalData, a leading data and analytics company.

“Surging inflationary pressures and a hike in interest rates by the Federal Reserve resulted in a broad selloff in technology stocks in Q2.”

Meta, Apple, Amazon, Microsoft and Google (FAAMG) stocks, along with Taiwan Semiconductor and Nvidia were the seven companies that lost over $100 billion in valuation each, with Apple losing the most with $636.7 billion.

Apple kicked off the year by becoming the first company to reach the milestone of $3 trillion in valuation. However, within the next two quarters, the company’s valuation dropped to $2.2 trillion, primarily due to various factors such as Fed rate hikes, increasing inflationary pressures, weakening consumer confidence and global supply chain challenges.

Microsoft’s valuation dropped by $390.5 billion in Q2 compared to Q1, although the company is expected to bounce back to its previous quarter levels due to its full-year results this month. 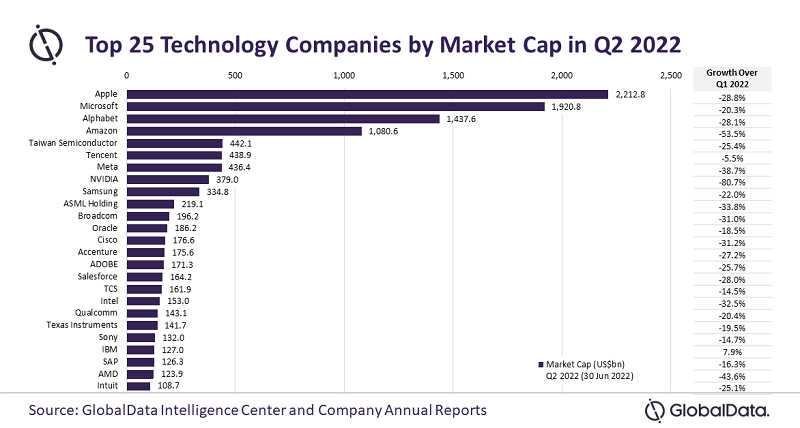 “Besides the impact of the Fed’s decision to increase interest rates to counter rising inflation, Meta’s stocks were also affected by Apple’s recently released changes to iOS and its Safari browser that limited Meta’s ads monetization capability. The company lost more than 50% of its valuation in H1 2022.”

Though Google has consistently maintained its $1.5 trillion valuation in the past few quarters, it lost around $400 billion valuation in Q2 2022 compared to the previous quarter. Soaring inflationary pressures and interest rate hikes continued to impact the company’s stocks. The possibility of an impending recession also hurt its shareholders’ sentiments.

An enhanced focus on cloud and AI streams allowed IBM to be the only company in the top 25 that reported a gain in valuation in Q2 vs Q1.

Technology companies include software and hardware developers, IT service providers (including internet-based service providers), and manufacturers of electronics, including semiconductors, mobile devices, etc. GlobalData ranks the Top 25 companies based on MCap performance.