With #BreaktheBias the theme of this year’s International Women’s Day, tech recruiters admit women are being overlooked for tech roles.

Two-thirds (66%) of recruiters say bias – unconscious or deliberate – is an issue when it comes to tech hiring, according to a joint survey by developer recruitment platform CodinGame and online technical interview platform CoderPad.

Furthermore, one third (33%) of those recruiters polled expressed stronger concerns, and admitted that bias is a significant problem when hiring for tech roles.

Despite efforts to attract more women into the tech sector, and make it more inclusive, less than a fifth of employees working in tech are female. And it is clear that talented women are missing out on tech positions because of ingrained bias during the recruitment process.

To address the problem at the point of hiring, many recruiters are now actively taking steps to remove bias altogether, to ensure female tech talent isn’t overlooked.

Last month, CodinGame and CoderPad reported that 57% of recruiters are ready to ditch the CV – which can introduce bias into the hiring process – turning instead to more objective hiring methods, such as practical technical assessments and live coding interviews.

These solutions help recruiters focus on candidate experience, bringing a layer of transparency and fairness to the hiring process, and more accurately identify tech talent.

More than four-in-ten (42%) recruiters polled have said they are already using or planning to use skills-based technical assessments to improve diversity.

Recruiters were also asked what other measures companies have implemented or plan to implement to improve diversity in tech recruitment. 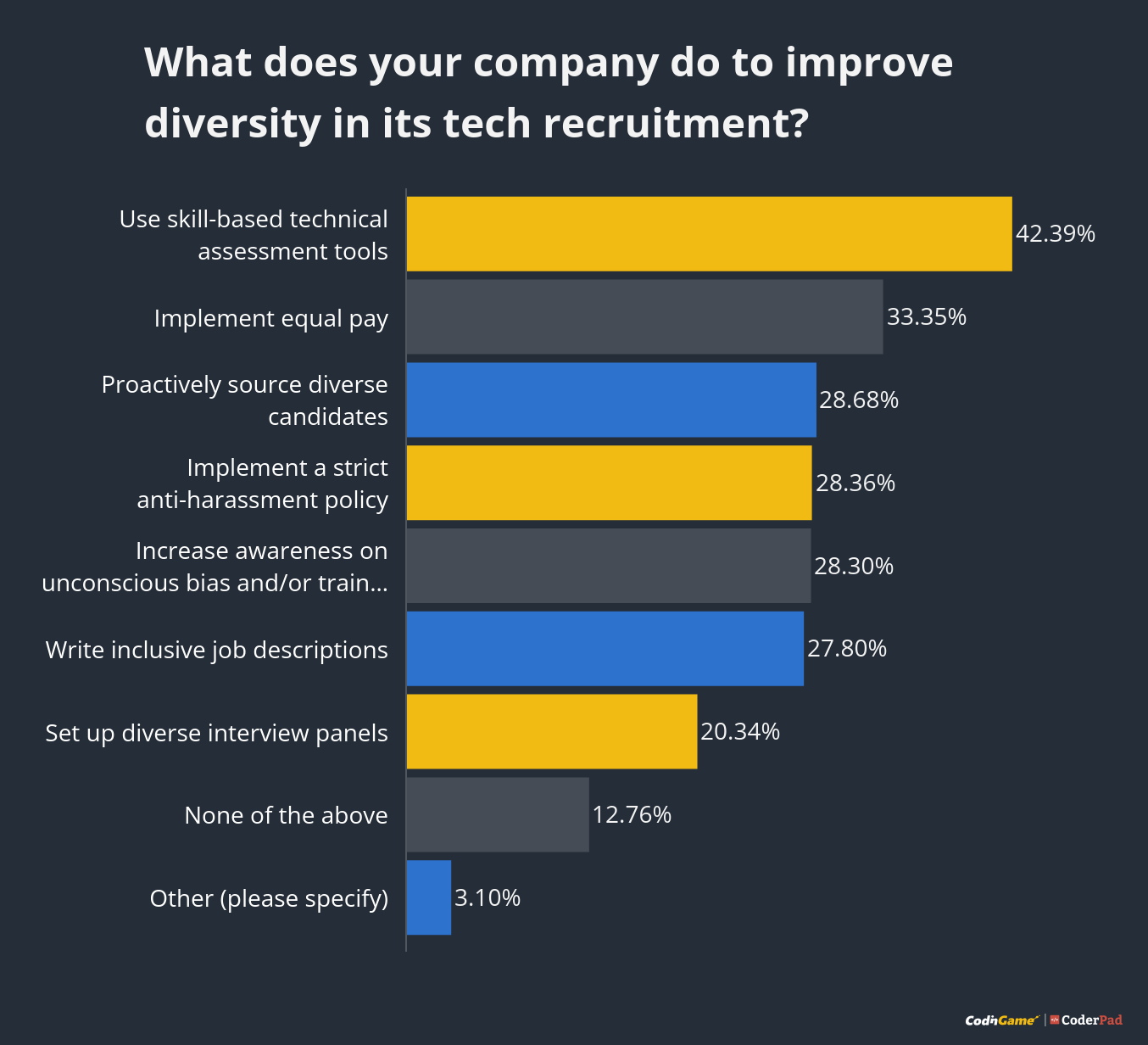 Also, with many female developers not taking the traditional route to a tech career, by studying a STEM subject at university, 80% of recruiters now actively hire developers from non-academic backgrounds.

The majority of students on STEM courses at UK universities are still men, which is another area that needs to be addressed.

However, looking beyond traditional educational routes when hiring for tech roles, should open up opportunities for female developers who are self-taught, and didn’t learn to code at school or university.

Once hired, it’s also important that companies ensure there is a support network that makes women want to stay. For example, providing a female mentor if they are in a junior position, or offering flexible working as part of an inclusive policy, to help try to combine family and professional life. This could include remote working, taking time off freely or the possibility of working staggered hours, to coincide with school pick-up times.

“Every day I’m proud of the progress the tech industry has made to create a more inclusive and diverse community. And every day I continue to see how much further we need to go.

“For International Women’s Day, I hope everyone will ask a woman in their life how they can support her, take time to get educated on the inequality that exists, and fight discrimination in and out of the workplace. It will take all of us to #breakthebias – women can’t do it alone.”

“Despite the efforts the tech industry is making to become a more diverse and inclusive community, women remain widely underrepresented in IT roles. And unconscious bias continues to be a major factor in women being overlooked when companies are recruiting for tech positions.

“It’s crucial that bias during the hiring process is removed and IWD recognises how crucial breaking the bias is if we are going to see equality and opportunities for women.