Apple’s affordable iPhone SE (2020) sold 24 million units in the year of its launch and has seemingly prompted the company to reduce the launch time for its successor. It took four years for Apple to launch a successor to its first iPhone SE, but the next edition could be arriving in 2022, likely in the first half of the year. A report from ITHome suggests that the iPhone SE 3 (or the iPhone SE 2022 as it might be called) could be entering trial production soon and that the phone is expected to launch in the first half of 2022.  It also claimed that multiple component vendors were preparing to ship the iPhone SE 3, so it sounds like things are really ramping up. For what it’s worth, one previous leak said the iPhone SE 3 would land in March, which could probably line up with what we’re hearing here. See Mobile Unlocked’s iPhone guide for a full list of Apple phone models and device specifications. Tech Radar

A web page and a Facebook post by Arsenal football club promoting crypto-based fan tokens broke advertising rules, a watchdog has ruled. The Advertising Standards Authority (ASA) argued the club had “failed to illustrate the risk of the investment”. It ruled “the ads must not appear again in the form complained about”. Arsenal said it would seek an independent review of the ruling, adding that the club had provided information on the financial risks. Several top-tier football clubs offer fan tokens. But critics, including some supporters’ groups, suggest that clubs who promote crypto fan tokens are encouraging people to engage in the risky, and largely unregulated, world of cryptocurrency investment. BBC

Wearables manufacturer Garmin is reportedly readying its next-gen smartwatch lineup for an early 2022 launch. The company will unveil the new lineup at CES in January next year, and it will include four new smartwatches — the Garmin Epix Gen 2, the Fenix 7, the Instinct 2, and the Venu 2 Plus. While Garmin has now released any official information about the upcoming smartwatches, leaked renders showcasing their design have popped up online. The leaked renders come from noted leaker Roland Quandt (via WinFuture), and they showcase all the new smartwatches in Garmin’s 2022 smartwatch lineup. The renders suggest that the upcoming Garmin Epix Gen 2 will sport a round watch face, unlike its predecessor, along with a bunch of new features like a SpO2 sensor, heart rate monitoring, and sleep tracking capabilities. XDA 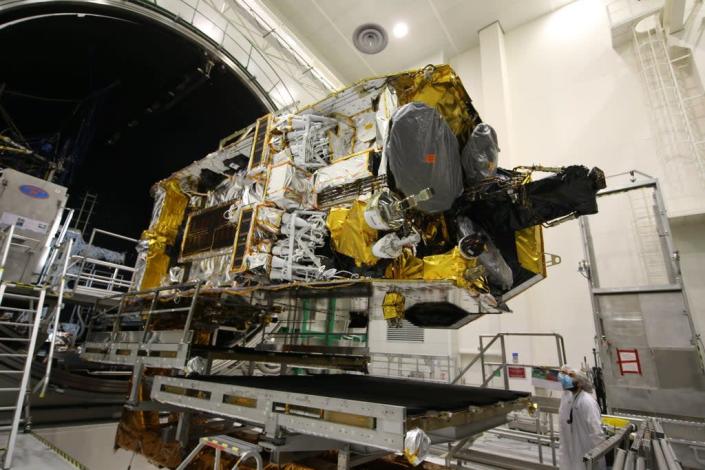 British firm Inmarsat is expected to launch what it says is the “most sophisticated commercial communication satellite ever built”. The satellite firm’s I-6 F1 is due to lift off from Japan on Wednesday afternoon on board a launch vehicle built by Mitsubishi Heavy Industries. The satellite is the largest commercial comms satellite ever launched, Inmarsat said. It is the firm’s first hybrid satellite, carrying two different communication network payloads, which will boost infrastructure networks such as maritime and aviation safety, remote agriculture and emergency response, and also in-flight WiFi on planes and secure communications for heads of state. The beauty is that these satellites have got a minimum lifespan of around 15 years so it will go the 2040s and beyond. Yahoo!

Venus could be becoming “more habitable” after evidence of bacterial “lifeforms” were found in its clouds, scientists have said. Researchers from Cardiff University, MIT and Cambridge University have suggested the planet, which is 47.34m kilometres (29.42m miles) from Earth, could have the colourless gas made up of nitrogen and hydrogen that is also known as ammonia in its clouds. The scientists have modelled a set of chemical processes to show how a cascade of chemical reactions would neutralise surrounding droplets of sulfuric acid if there were any traces of ammonia. This would then result in the acidity of the clouds dropping from -11 to zero, and although this is still very acidic on the pH scale, it would be at a level that life could potentially survive at. Sky News