Wistaston Road in Crewe has the slowest street for broadband in the UK, with an average download speed of 0.24Mbps, according to the analysis of 276,083 consumer speed tests collated by Uswitch.com, the comparison and switching service.

Sluggish broadband in Wistaston Road is a staggering 3,567 times slower than the UK’s fastest street, Haul Fryn in Birchgrove, Swansea, where average download speeds reached 882Mbps over the past year.

Haul Fryn is 243Mbps quicker than last year’s fastest street, showing the improvements in ultrafast broadband infrastructure across the UK with the rollout of full-fibre broadband. 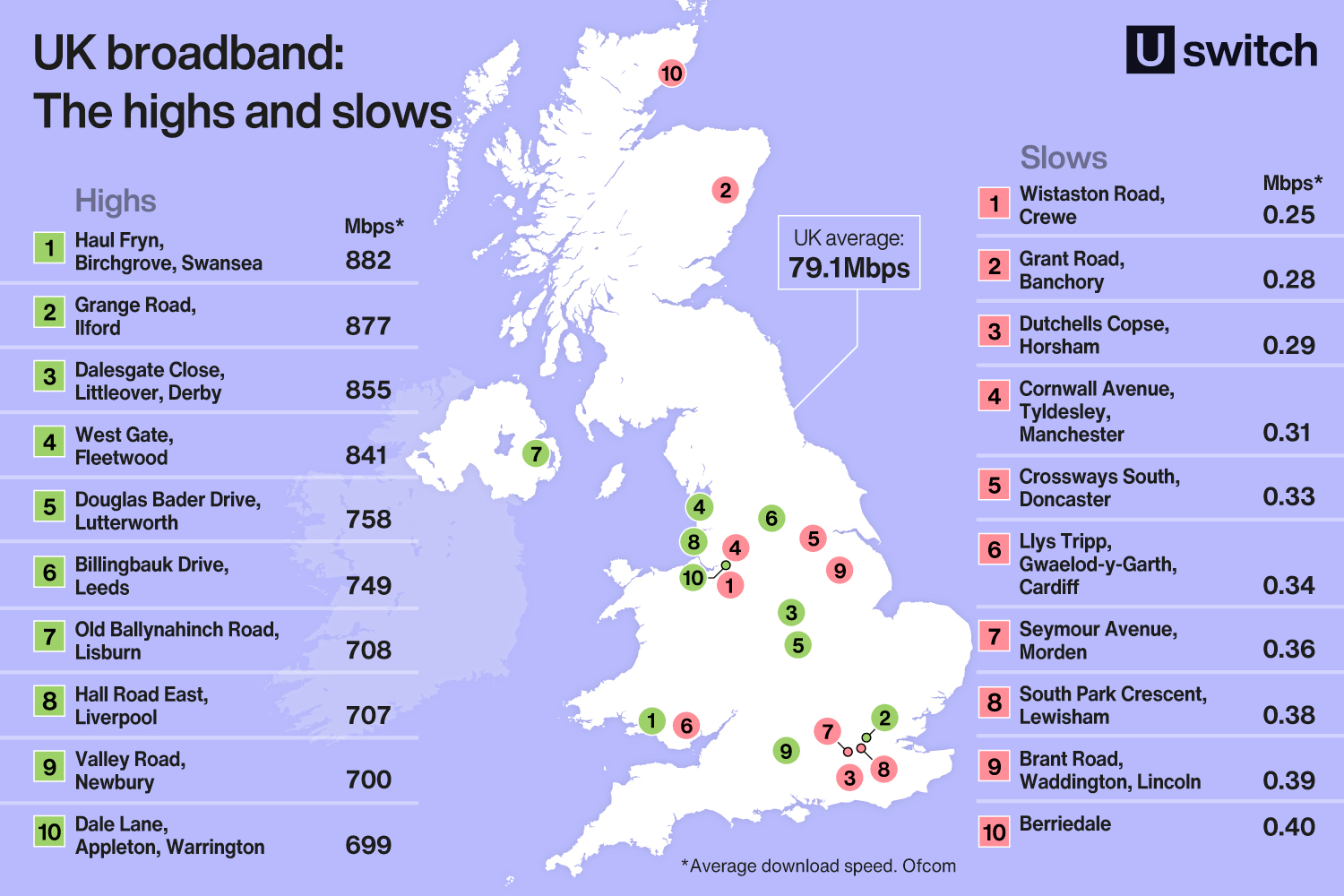 For the unfortunate residents of Wistaston Road suffering slow speeds, it would take more than 48 hours to download a two-hour HD film. By contrast, the people of Haul Fryn could download the same film in just 47 seconds.

The good news is that the number of broadband users enjoying faster speeds is growing. Two-fifths of users (43%) now get superfast speeds of more than 30Mbps, which is almost double than those  (22%) six years ago. But despite the fact that superfast broadband is available to 96% of the country, and ultrafast to 62%, a recent Uswitch survey found that four in ten (40%) are unaware they can access it in their local area.

Residents in nine of the ten slowest streets could actually have access to a quicker service, suggesting that consumers who are willing to pay for faster speeds are being deprived of better broadband because they aren’t aware they could change to a faster alternative.

The slowest and fastest UK streets have been revealed through the analysis of 276,083 speed tests run by broadband users over the last year. The number of speed tests is up 124% on 2019’s tally of 122,845, with the dramatic rise suggesting that consumers have been paying closer attention to the performance of their home broadband since the start of the pandemic.

“Britain’s broadband keeps getting quicker every year, but parts of the country continue to be left behind.

“Residents of this year’s fastest street, Haul Fryn, could download a film in 47 seconds – where it would take those living in Wistaston Road more than 48 hours to do the same thing.

“At a time when so many of us rely on our broadband for work, streaming films and TV, and gaming, it’s hard to imagine how frustrating such a slow connection must be.

“It’s great to witness the increased uptake of ultrafast broadband, but we don’t want to see large swathes of the country left behind on shoddy connections that aren’t cutting it for modern life.

“Initiatives like the Universal Service Obligation and Project Gigabit are helping improve connections at both ends of the spectrum, but there is a lot more to be done so consumers don’t get left behind.

“Of the ten slowest streets, nine could have access to faster broadband, so we urge residents there — and anyone else unhappy with their broadband speeds — to do a quick search online to see what speeds they could be getting with another provider.”

Anyone frustrated with their broadband service can test what speed they’re getting at www.uswitch.com/broadband/speedtest