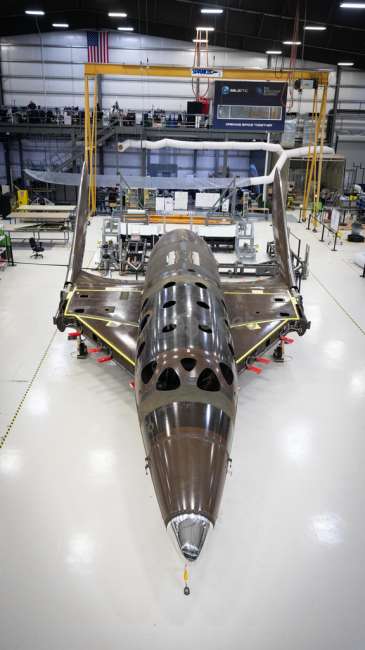 Virgin Galactic has announced a major milestone in the build of its next spaceship. In a moment comparable to a ship taking to the water for the first time, the latest spaceship is now bearing its own weight in a stage of its assembly termed ‘Weight on Wheels’.

At this critical juncture, 80% of the vehicle’s major structural assembly is complete.

This Weight on Wheels milestone has been reached considerably faster than it took to get to this stage with its first SpaceShipTwo, VSS Unity, which is currently in flight-test. It claims this has been achieved through experience curve benefits which include an evolution to a more modular-based assembly process.

With the spaceship now bearing its own weight, the teams are starting work connecting the modules’ integrated systems, including the flight control systems from fuselage to tail booms.

A secondary benefit of Weight on Wheels is the mobility it affords the spaceship, allowing better access and greater efficiencies for the engineers as they complete the build. The teams will also now be able to check and confirm the vehicle’s weight.

As this work completes, the spaceship will be positioned in the hangar for the start of integrated vehicle ground testing which verifies the integrity of all its systems. This is a precursor to moving the spaceship from Mojave to Spaceport America in New Mexico where it will start its flight test program.

The Virgin Galactic spaceship fleet is beginning to take shape with a third spaceship, also under construction in Mojave, currently around 50% structurally complete. In the coming months, that vehicle will achieve its next major milestone, with completion of its wing and tail boom structure. Virgin Galactic plans to build 5 spaceships in total and a second mothership to meet the demand for human space flight beyond the 600 Future Astronauts from 60 countries who have already purchased tickets to fly.

“Reaching the Weight on Wheels milestone, considerably faster than it was achieved for VSS Unity, is a huge accomplishment and is testament to the growing expertise of the teams and the unique capabilities of our company. We now have two spaceships which are structurally complete with a third not too far behind. These spaceships will very soon be completing regular trips to space and back, providing thousands of private astronauts with a truly transformative experience.’’