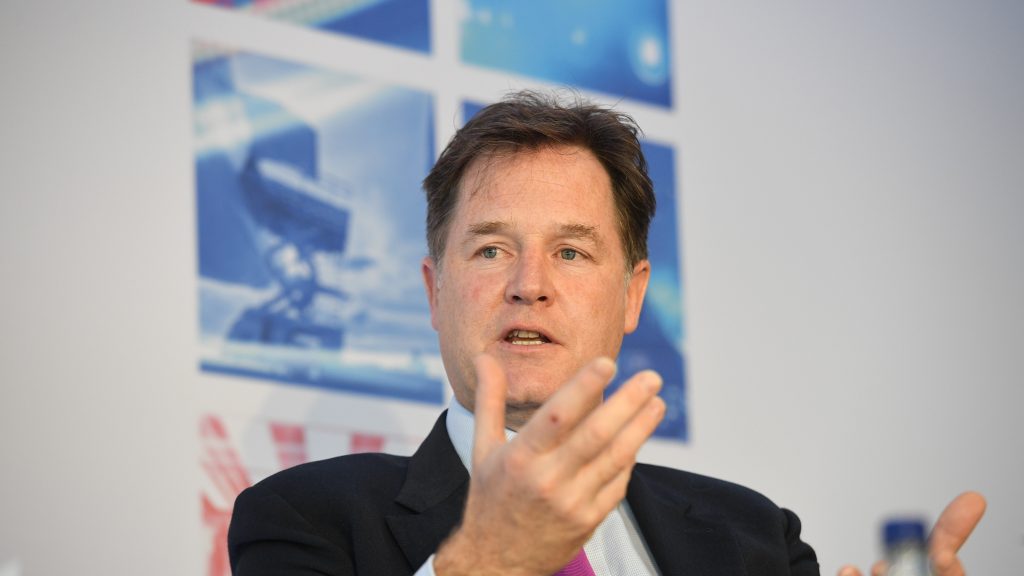 Facebook’s head of global affairs Sir Nick Clegg has reiterated his belief that increased regulation of tech firms can not be done solely by the internet companies themselves.

Sir Nick said it should not be left to a private company to “decide who is or isn’t a legitimate participant in an election” and has called on governments and industry to work together on how to prevent bad content appearing online.

The former deputy prime minister has said the social network plans to set up an independent oversight board to which people can appeal against content decisions made by Facebook.

He used a speech in Berlin to defend the company, saying it was the victim of a “tech lash”, and also dismissed suggestions the firm should be broken up.

On working with government on new regulation, Sir Nick said: “Whether the rules Facebook has created, and the systems it uses to enforce them, work, and whether they tread the right side of the line in terms of what is and isn’t allowed, will of course be the subject of much debate – and rightly so.

“We will get some things right and some wrong.

“But it would be a much easier task, as well as a more democratically sound one, if some of the sensitive decisions we have to make were instead taken by people who are democratically accountable to the people at large, rather than by a private company.

“After all, why should a private company decide who is or isn’t a legitimate participant in an election?

“We need governments and policymakers to engage with issues like these and help set the parameters for us.”

Sir Nick also argued that breaking up Facebook – which also owns Instagram and WhatsApp – would harm the company’s ability to help with online safety and security, as well as arguing the company had a number of competitors for all its platforms.

“If you visit an app store you will find that for every service we offer, whether it is photo or videosharing, private messaging or broadcasting, there are several rival services available.

“And the world of social media is so vibrant and fluid that new apps are popping up constantly,” he said.

“There are also things that Facebook is only able to do because of the scale on which it operates.

“It can make a real impact on safety and security because of the scale of investment it can put in; and by having infrastructure across a network of apps it can act to reduce issues across each of them .

“For example, despite the fact that WhatsApp is encrypted and Facebook isn’t, if we identify someone on Facebook who poses a risk, we can not only take action against them on that platform but also share their identity with WhatsApp.”

He also dismissed claims that political consultancy Cambridge Analytica – which is believed to have harvested personal Facebook data via a third party app – swayed people’s decision to vote Leave in 2016.

But the vice president for global affairs and communications at the social network did acknowledge the site was right to be criticised for some of its actions in the 15 years since its launch.

He said that the “company’s attitude to the use of data in its early years” was one area worthy of criticism.

“Facebook not only collected people’s data, it operated a remarkably open platform where lots of third parties were able to integrate and build apps using that store of information at the user’s direction,” he said

“Facebook’s early business model was designed at a time when attitudes towards data were much more permissive.

“But society’s attitudes have changed and we have to change with them.

“That starts with acknowledging that data privacy has not always been the priority it should have been. It absolutely is now.”

He added that it was “equally right to acknowledge that Facebook has not always thought deeply enough about how its services could be used – or indeed abused – by authoritarian regimes”.

“We thought, perhaps with traces of that early utopianism still in our bloodstream, that simply by making our products available in these places that we would be a force for good.

“Liberating people. Giving them the ability to communicate in a way they didn’t have before,” he said.

“We thought that these would only have positive outcomes.

“We didn’t foresee that, in countries like Myanmar, the tinder box of religious and ethnic tensions in these countries could catch alight on our platforms if we didn’t have adequate safety systems in place.”

Speaking on the same radio programme after Sir Nick, the chairman of the Commons Digital, Culture, Media and Sport Committee, Damian Collins, criticised Facebook’s plans for the new oversight board.

“They’re trying to pass on the responsibility,” he said.

“What they’re saying to parliaments and governments is, well you make things illegal and we’ll obey your laws, but other than that don’t expect us to exercise any judgment about how people use our services.”

However, the social network did receive some support from human rights organisation Article 19, whose executive director Thomas Hughes said: “Nick Clegg is right that social media companies should not come up with the ‘rules’ for content regulation on their own.

“However, statutory regulation of user-generated content may unduly restrict freedom of expression, and is likely to disproportionately impact minority, vulnerable or marginalised voices.”