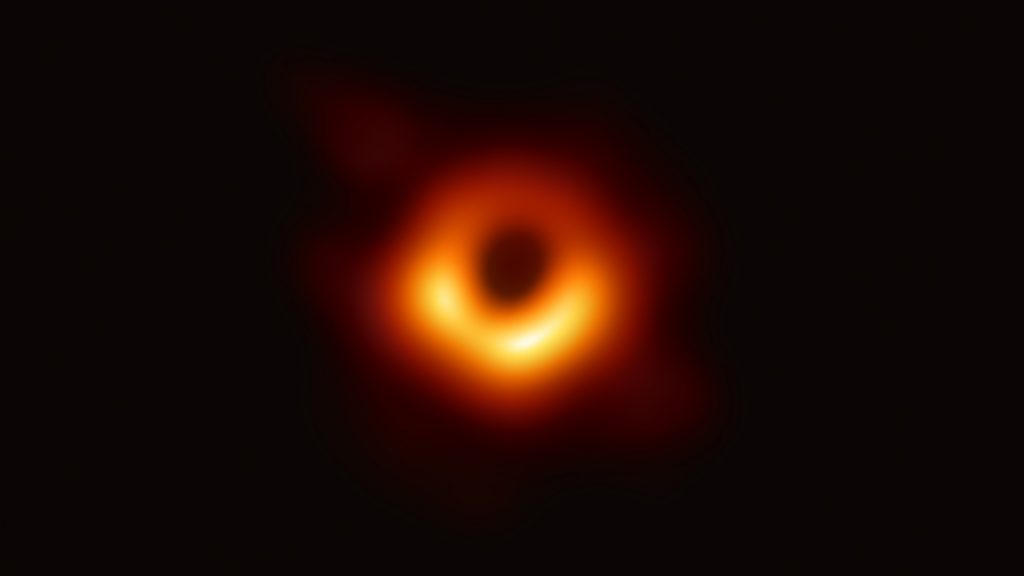 The glowing doughnut lost in the vastness of space looks harmless enough – but it is just as well the object is 55 million light years away.

This is the first image astronomers have captured of a supermassive black hole big enough to swallow stars at the centre of a distant galaxy. Nothing that gets too close to the monstrous gravitational vortex can ever escape – not even light.

But at the “point-of-no-return” precipice around its edge – the boundary scientists call the Event Horizon – hot gas, matter and radiation rage in a swirling eddy.

While a black hole itself is by its nature invisibly dark, astronomers can observe the Event Horizon maelstrom with sufficiently powerful instruments.

The image of the supermassive black hole at the core of galaxy M87 was obtained by combining eight radio dishes around the world into one global telescope.

It shows a thick ring of light surrounding a dark centre.

Nothing like this photo has ever been obtained before. Previously, scientists have only been able to visualise black holes in simulations.

In 2012 astronomers from Johns Hopkins University in the US published images of a black hole 2.7 million light years away gobbling up a Red Giant star – but it was nothing more than a tiny smudge of light.

At one of six press conferences around the world announcing the landmark results from the Event Horizon Telescope project, Dr Sheperd Doelman, from Harvard University in the US, said: “We have seen what we thought was unseeable. We have seen and taken a picture of a black hole.

“This is a remarkable achievement. We now have visual evidence of a black hole. This is the strongest evidence that we have to date of the existence of black holes.”

The EHT radio telescopes were also pointed at a supermassive black hole at the centre of our own galaxy, the Milky Way – an energy source known as Sagittarius A (SgrA).

Prior to the announcement there had been speculation that images of SgrA would provide the most spectacular results.

But in fact it was the M87 black hole that stole the show. The size of the object almost defies the imagination – it contains 6.5 billion times more mass than the sun.

At one of the press conferences held at the National Press Club in Washington DC, scientists explained that SgrA was a “complex” object and the M87 black hole had been easier to image.

They said they were hoping to release images of SgrA soon but could make “no promises”.