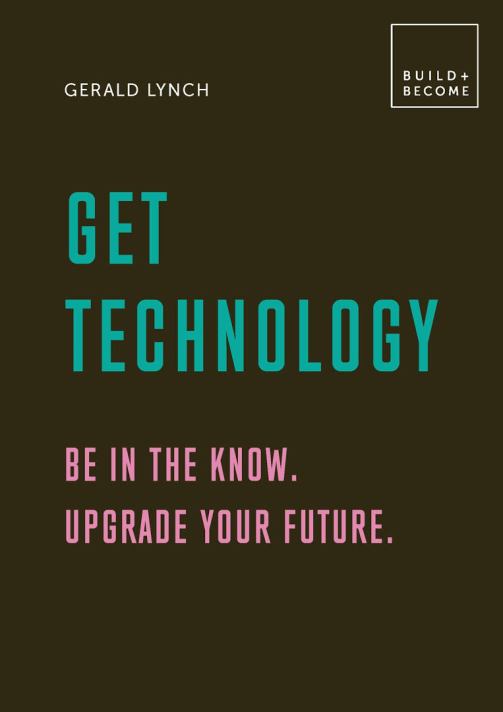 Chris Price speaks to former Tech Digest editor Gerald Lynch about everything from bionics to transhumanism – just two topics featured in his latest book, Get Technology…

Q: How did you get into technology? Were you into computer games as a kid?

Like most people my age, it was probably through computer games. We had an Amiga 500 growing up, which was a little more complex (in terms of its archaic quirks) than your standard games console of today. The age of the floppy disk!

But as we got older, my older brother Kevin became a technology journalist, and that just opened the doors to all kinds of gadgetry. So there was always some new tech-filled toy to play about with, and that’s probably what led me into tech journalism myself.

What’s your current favourite piece of technology and why?

It changes daily – I couldn’t live without my MacBook for instance, but that’s become such an extension of me that I don’t even think of it as a gadget anymore. It’s an essential. I have an Amazon Echo Plus that I’m very enamoured with at the moment – the improvements in voice recognition over the past five or so years are monumental. You do feel like you’re living with a piece of the future.

Any pet hates, bug bears about technology? Any devices you detest?

Despite my love of tech, I’m basically terrified of all progress too. The possibilities with AI, for instance, are as amazing as they are frightening. There’s definitely a part of me that would love to just go and live off the grid somewhere – but then I’d probably be annoyed within a few days that I can’t get hold of a Netflix or Spotify stream!

You write about transhumanism in your book? What on earth is all that about?

I love transhumanism – it’s the sort of mental sci-fi stuff that you’d have once only seen in fiction. Essentially, it’s a movement concerned with the elongation of human life through fusing ourselves with technology. Perhaps even finding some semblance of immortality through it.

So one of the key ideas is the possibility of ‘downloading’ the contents of our brains to some form of hardware, which would let us exist beyond the vulnerable fleshy bodies we are born into. Some people are already choosing to be cryogenically frozen in the hope of waking up in a future where this sort of thing is possible. Raise your glasses to the crazies – they may, in a way, outlive us all!

Bionics is another area of interest too. Do you think we’ll have eventually robot Olympics where cyborgs take on ‘robotic’ humans like Lee Majors in the Six Million Dollar Man

There already are some robot competitions not dissimilar to what you’re envisioning here, with robots competing against each other to do what would seem mundane tasks to us – like opening a door with a handle – but are incredibly complex to program and engineer.

As for bionics, there are great leaps being made. Bionic eyes will soon be of a level to bring some reasonable form of sight back to the blind, like the Second Sight Argus II (pictured above) is approaching now. And as for competitive bionics, it’s not quite the same, but look to the Paralympics. He may have fallen from grace, but Oscar Pistorius’s “blade runner” tech would have seemed unfathomable up until a few years ago.

Do you think bionics will eventually be developed to help disabled people walk or maybe people with debilitating diseases like Parkinson’s.

Again, these are developments that aren’t as far away as you’d think. Companies like Japan’s Cyberdyne are making exoskeletons to strengthen limbs and could be used to restore mobility.

Parkinson’s is a tricky one as it’s still a disease we’re trying to understand. But an exoskeleton could certainly alleviate the symptoms, using motion sensors and actuators to counteract the unintended movements and tremors.

Cybersecurity is a big issue at the moment. Do you think modern warfare is now about nation states trying to infiltrate each other’s IT systems as much as it is fighting on the ground?

Certainly – whether we see the results of this new sort of Cold War first hand or not. It may not be as bombastic as the Blitz, but so much infrastructure now is underpinned by connected technology that entire systems we take for granted, like the water network or electricity grid, are vulnerable to remote attack.

And of course there’s the evidence of political manipulation through social media – it’s a whole new form of warfare.

What are you really excited about in the next 20 years when it comes to technology and what truly terrifies you?

An increasingly-accessible world excites me – democratising technologies like driverless cars and augmented reality headsets. The gadgetry that will open up opportunities and skillsets that once would have required major tutelage.

But I’m also afraid of giving too much of ourselves over to technology, and those left behind by an increasing emphasis on tech literacy.

Do you think technology has made us less empathetic and less communicative than ever before? After all it seems we don’t talk any more, we just text or post messages via social media.

I’d say the opposite actually – it just amplifies your personality. If you’re a chatty person you’ll hold court on several messaging platforms, and organise the sort of giant meet ups that only a networked world can allow. And if you’re a ‘troll’, you’d have been a nasty piece of work probably offline too.

I think it’s just much more visible now. While that can be frightening, especially in terms of some of the extreme views the murkier corners of the web throws up, it should make us more proactive too – the surfacing of worrying subcultures, misogynists, racists and so forth gives us an opportunity to take stock and find ways to combat them. You can’t feign ignorance any more to the wrong doings of some people in society – everyone is accountable.

AR and VR seem to have been around for ages. Do you think virtual reality will ever become a mass market proposition or do you think it’s held back by people having to wear special headsets?

I’d love to see VR go mainstream. I’m still waiting for a holodeck-like version of Jurassic Park that I can wonder around without getting eaten! VR has come on leaps and bounds, but it’s still a niche area – it’s expensive, and it still doesn’t quite meet the historic pop-culture expectations of what should be possible yet.

It’s good fun, but not yet a replacement for reality by any measure. But every time I try a new headset, progress is being made. If it remains a steadily growing special interest thing, I’d be personally happy enough with that.

AR is a different beast altogether though, and I now agree with the consensus that it’ll have far bigger everyday reach. If only because expectations around what AR can be are just blossoming now, and the fact that, whether using a mobile phone or some sort of connected spectacles, you’ll be placing AR imagery onto the real world around you, rather than locking yourself into a more claustrophobic VR experience.