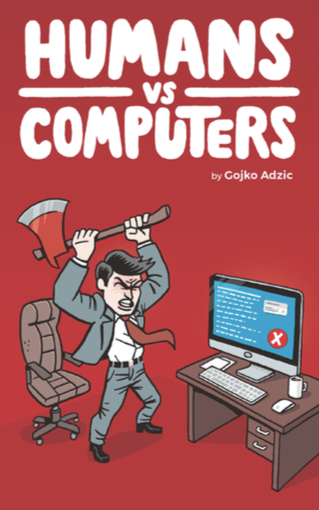 Our lives are increasingly tracked and monitored by software. In this brave new world, humans can’t cope with information overload. Instead, governments and companies rely on computers to automatically detect fraud, predict behaviour and enforce laws.

Clever marketing tricks us into believing that phones, TV sets and even cars are somehow smart. Yet all those computer systems were created by people – people who are well-meaning but fallible and biased.

Digitising a piece of work doesn’t mean there will be no mistakes, but instead guarantees that when mistakes happen, they’ll run at a massive scale.

From the man whose new personalised number plate brought him 2,000 parking fines a month to the prisoner released 3 years early by an automated parole review, the cautionary tales featured in Humans Vs Computers will make you laugh till you cry.

But this is also a book on how to prevent, avoid and reduce the impact of such problems. When you’re banging your head against a digital wall, the stories in this book will help you understand a little better what’s going on and show you where to look for problems.

And if nothing else, they will allow you to see the lighter side of the binary chaos.

Want to win a copy of Humans Vs Computers? We have 3 copies worth £9.99 each to give away. To be in with a chance of winning, simply tell us the title of Radiohead’s third studio album. Was it?

You can enter via TechDigest’s Facebook page (//www.facebook.com/techdigest.tv/) or Twitter (@techdigestnews) with the hashtag #HumansvComputers or via email at [email protected] using ‘HumansvComputers’ as the subject header. Closing date for entries is October 1st . UK ENTRIES ONLY. Usual competition rules apply. See terms and conditions here.

But don’t worry if you don’t win, you can always buy a copy of the book instead using the link below.