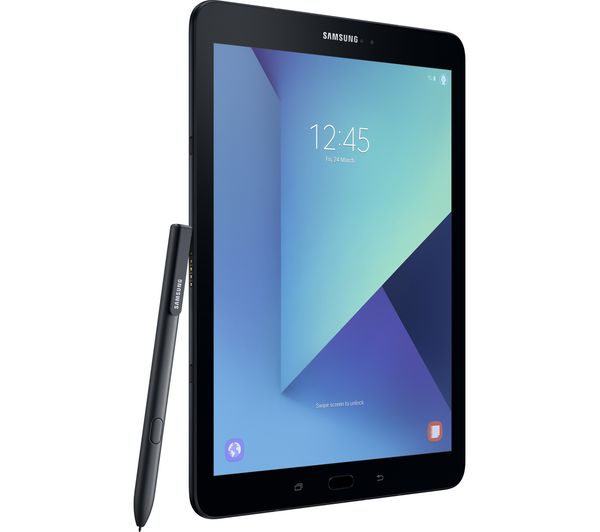 Samsung has refreshed its tablet range for the first time since 2015 with a new flagship model. Replacing the Galaxy Tab S2, the new S3 is designed to compete with Apple’s iPad Pro and boasts a 9.7 inch display and a stylus pen as standard. Available in black or silver (we tested the black model) it can also be paired with a keyboard as an optional extra.

Amazingly, it’s over 7 years since the first iPad launched in the UK. Much has changed during this period. Several Prime Ministers have been and gone while in the tech world we’ve seen several iterations of the iPad and a whole raft of supposed iPad ‘killers’ flood the market.

However, it’s also because, unlike smartphones, there isn’t the same impetus with a web tablet to upgrade every 12 months or so. Instead, you can kind of dust off your web tablet from a few years back and watch a film or play a game if you fancy. What’s more, web tablets have by and large failed to replace laptops as many originally predicted, despite the addition of keyboards and more processing power.

In short, the web tablet is going through a bit of an identity crisis. At the bottom end of the market, where you can find web tablets for under £100, they’ve become pretty much a commodity – an impulse purchase to get for the kids to keep them quiet in the back of the car or on a plane.

Conversely, at the higher end of the market they are finding a niche in the creative world for designers, architects etc. who are using them as professional devices, particularly for sketching or drawing plans. 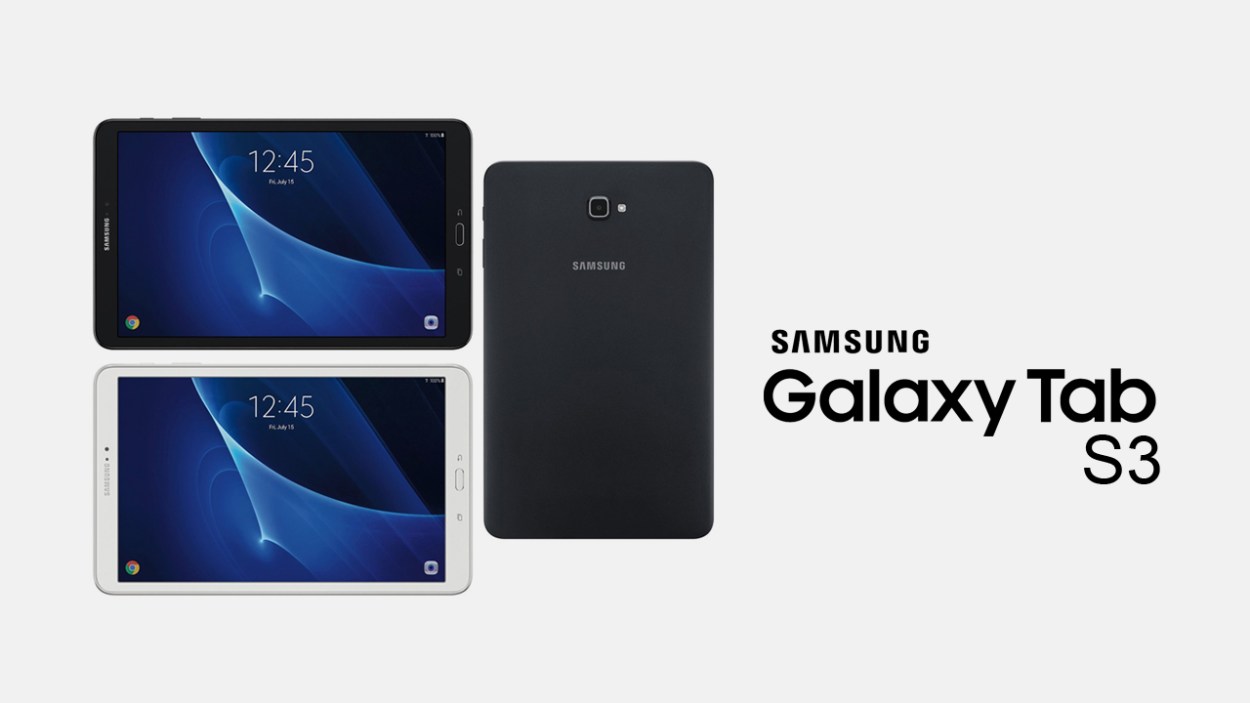 Certainly it’s the professional market which the Samsung Galaxy Tab S3 is squarely aimed at, taking on the iPad Pro with a decent sized 9.7inch screen and the S Pen Stylus included as standard – unlike the Apple Pencil which will set you back a further £99.

Taking the black tablet out of the black box, my first thought was ‘how boring is this to look at?’ while my second was ‘how light is this?’ Tipping the scales at 429 grammes, the S3 is a little lighter than the iPad Pro and a little skinnier than the iPhone 7 – a world away from the original chunky iPads.

Rather than the metal back favoured by its predecessor, the S3 has a black glass back, giving it the impression of a large featureless slate tile you might put on the floor of your kitchen. However, the silver variation does look a little more interesting.

Personally, I would have preferred a metal back which wouldn’t get so covered in fingerprints quite so easily, but then many people will no doubt find the glass back adds a bit of class (as well as glass).

Certainly the design is all very minimalist with a small black home button at the bottom of the screen (which doubles as a fingerprint scanner) and two ‘soft’ buttons either side of it for back and recent screens.

Unusually there are four speakers (two at the top and two at the bottom), a 3.5mm headphone jack (glad to see these haven’t been removed from tablets yet), volume up/down and power buttons.

There’s also a Micro SD slot for adding extra storage (only 32Gb is provided as standard so you probably will want to), a USB-C port for charging and a keyboard dock port at the side – the keyboard to go with the Galaxy Tab S3 will cost you a further £100 or so. Samsung provides a fast charging plug so you can top up the power very quickly indeed via the mains.

On the front is a 5 Megapixel camera for selfies/video conferencing while at the back is a 13 megapixels camera with an impressive, at least on paper, f1.9 aperture – though I would imagine very few people are using their tablet for taking pictures, except maybe for reference purposes. 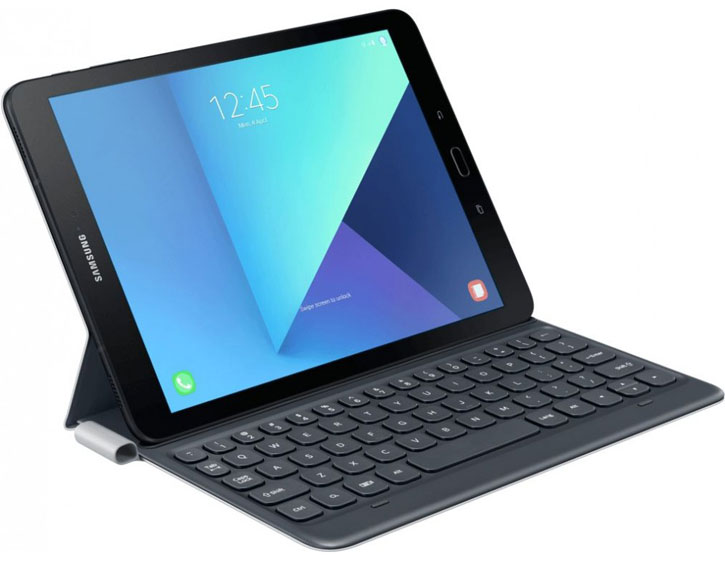 What’s particularly impressive about the Galaxy Tab S3 is the screen. Samsung uses an AMOLED screen, rather than Apple’s IPS LCD panels, with Quad HD (QXGA) resolution of 2048 x 1536 pixels.

As a result, contrast ratios seem excellent with the blacks looking very black. Watching Glastonbury highlights on the iPlayer I was struck by just how vibrant the stage lighting looked.

What’s more, this web tablet is equipped with HDR (High Dynamic Range) technology – see here for a full explanation – which promises even higher contrast and even more vivid colours. However, although this technology is being rolled out on Netflix and Amazon Prime programmes, and is available on some TVs already, it’s not yet available on tablets.

Nor is it just picture quality where the Samsung excels. Sound quality isn’t bad either. I say not bad because obviously there are audio limitations of listening to anything through a small web tablet.

However, audio quality is certainly helped by having four speakers which follow the direction of the screen and work effectively whichever way round you hold the device. For the Galaxy Tab S3, Samsung has partnered with AKG Acoustics in order to optimise sound quality and it’s a partnership that seems to have paid off.

Obviously, this web tablet isn’t just intended for ‘lean back’ applications like watching video content on the iPlayer, although this is where I think the Samsung excels. It’s also hoped the Galaxy Tab S3 will be a serious rival to the 9.7 inch iPad Pro.

Like the iPad, the S3 is intended to be used with a stylus pen, only instead of having to pay extra as you do with the Apple Pencil (an additional £99), the S Pen is included free of charge.

Because of the rectangular design, the S Pen won’t roll away, nor does it require recharging. However, annoyingly there isn’t anywhere on the tablet to house it, unless you invest in the additional keyboard.

Samsung have provided several apps with S Pen in mind. Either you can jot down important reminders, events, and more with Samsung Notes. Or you can let your creative side loose by sharing your latest masterpiece on PEN.UP or compose a tune by drawing in Soundcamp.

Samsung has narrowed the pen tip of the S Pen to 0.7mm in order to provide more authentic looking handwriting so hopefully it won’t look like a scribbly indecipherable mess which it normally looks like when you have to sign for a package on the doorstep!

There is certainly plenty to recommend the Samsung Galaxy S3. It’s extremely lightweight, has a great quality screen and offers much better sound than the vast majority of tablets.

Also while much has been written about Samsung’s problems with batteries in the past (particularly with regards to the Galaxy Note 7 ‘phablet’ which was recalled after units were found to catch fire from overheating), it seems the company has put these troubles behind them.

Certainly with the Galaxy S3 Samsung has taken fewer chances, incorporating a smaller 6000 mA battery, yet still managing to produce a unit which will play video for up to 12 hours which is very impressive indeed.

What’s more, improvements in the S Pen including a narrower tip and improved pressure sensor should make the S3 more appealing to the professional market. Samsung Flow also makes its Android tablet debut. This clever software allows you to move files wirelessly between smart phone and tablet, even take calls on your tablet (though you will look a bit stupid).

However, it’s not all good news. There is still something a little underwhelming about the Android tablet experience, in part because the apps simply don’t seem to feel as polished as with the iPad. Nor does it seem massively quick moving between one app or program and another. Perhaps this because of the inclusion of a slightly disappointing Snapdragon 820 processor (first found on Android phones in 2016).

With a price tag of £599, the Samsung S3 is also very much at the top end of the market. While this might not be a consideration to the professional user, for the casual tablet user it’s quite a large investment.