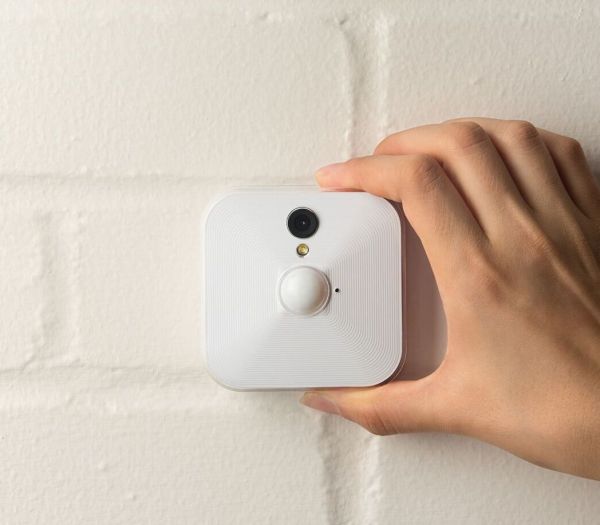 US company Blink has been around as the producer of video and imaging chipsets for high definition TVs for quite some time. However, it’s only recently decided to launch its own security camera system, raising over $1 million on Kickstarter in 2014. And while the cameras have been available since earlier in the year in the US, the products only started to roll out in the UK at the beginning of December via Blink’s own site and via Amazon. In this review we look at a system comprising two cameras and a ‘sync module’ (hub) costing £189.99.

Until a few years ago, setting up a home monitoring system was a difficult and expensive process. You needed wires all over the house and heavy and expensive surveillance cameras drilled into the walls. You also needed specialist monitoring equipment including touch screen devices from companies like Crestron.

How quickly things have changed. It’s now possible to fit a high quality, lightweight HD (720p) camera into a device not much bigger than a box of matches. Weighing only a few grammes, this can easily be placed on a bookshelf or fireplace or attached to the wall or ceiling using the mounting kit without any drilling required.

As well as incorporating the cameras, the set up also includes a small sync module (hub) which connects via Ethernet to your broadband router. Unlike the cameras which can be powered using two AA batteries, the sync module needs to be connected to the mains using the USB plug provided. You will also need to download the Blink Home Monitor app from the Apple App store or from Google Play if you are using an Android device.

Blink prides itself on its simple set up. And while it’s certainly much, much simpler than a conventional wired based system to set up it’s not without some initial teething problems.

Although the two cameras are very small and can be placed flat on any surface, I wanted to mount them discreetly in two areas: high up in the hallway facing the front door so I can see who comes in (see pic below) and in the kitchen next to the pet-sensitive PIR sensor for the burglar alarm so I can keep an eye on the dog as well the rear patio doors.

For this I needed the mounting system provided with the kit. I must admit at first I struggled to work out what I needed to do until I realised I needed to remove the circular insert at the back of the camera (I found online help here.) To be honest, now it seems blindingly obvious but my lack of DIY skills coupled with not wanting to damage the unit meant that I was reluctant to remove the circular piece of plastic.

A screw is provided for those who can screw the mount into the wall, but this wasn’t an option with my plaster walls without a drill so I used to the double sided sticky tape instead which held the cameras in place remarkably well. I then angled the brackets downwards to face the front and back doors (some later adjustment was required but not much).

The next challenge was to hook up the sync module to the router. This definitely wasn’t as easy as I had hoped.

After I’d managed to find the last spare port on my BT Home Hub 4 (the others taken up by Powerline adaptors and a Hive smart heating and hot water module), I needed to go through the set up process via the Blink app. This required temporarily connecting to Blink’s own wifi hot spot before then putting in the wifi code for my own router. Although this should’ve been a simple enough procedure it did log me out a couple of times during the process which was a little frustrating.

Nevertheless, I still managed to set up the entire system in around 30 minutes which is a vast improvement on other surveillance camera systems.

Using the app, you can see thumbnail images for each of the cameras you have set up via your smart phone, one underneath the other (the cameras can be individually named according to where they are in your property).

Although I’ve hooked up two cameras so far I’m getting a third which I’m going to put in the porch to keep an eye on the front door from the outside (currently the cameras are only intended for indoor use but Blink is planning to launch an outdoor model within the next 12 months). Up to 10 cameras can be fitted on the same system which is more than enough for most homes.

Picture quality from the cameras is much better than I was expecting with good 720p resolution and a nice wide angle lens. Particularly clear is the view from my hallway camera which is quite close to the router while the camera at the back of the house sometimes struggles to pick up the wifi signal needed to communicate with the sync module. As a result it isn’t always possible to view footage from the rear camera.

Blink claims a range of up to 100m but in reality much depends on the construction of your house including the thickness of the walls. Rarely can I get a wifi signal with more than a single bar at the back of the house without using an extender so it didn’t surprise me that footage from this camera was intermittent.

In addition to great colour images you also get one-way audio so you can hear what’s going on in your home. However, sadly you can’t use the cameras to talk to your pet (for this you will need a product like the Furbo pet camera which I’ll be reviewing shortly).

Obviously the whole point of the Blink surveillance cameras is to be able to keep an eye on your property while you are out and about via the app on your phone. It would also be nice to be able to use your laptop or desktop computer for remote monitoring too, but unfortunately this option isn’t available yet – though I would imagine it would be relatively simple to include on future models.

By pressing the cog button above the thumbnail view, each camera can be individually set up with adjustments for camera sensitivity and clip length ie. recording time. The default is five seconds recording time, but this can be increased to up to 60 seconds if you so wish.

Blink’s Cloud-based server provides storage for up to 7,200 total seconds of video (or 1,440 five-second events). If you reach your storage limit, your oldest alert clips will be overwritten by the newest.

Other options include a re-trigger time (ie time before the camera records again) and a built-in LED illuminator which automatically detects low-light conditions and turns on the LED to the illumination level you have chosen.

During recording a blue light on the front of the camera is displayed so anyone watching the unit will realise they are being filmed. Other features include a built in thermostat so you know the temperature of the room where each camera is placed (in Fahrenheit or Centigrade) as well as a battery level indicator to show when they are running down.

Blink claims that the batteries should last an impressive two years in standard use. I’ve no way of knowing yet whether that’s true, but after two weeks of regular use they are still fully charged. 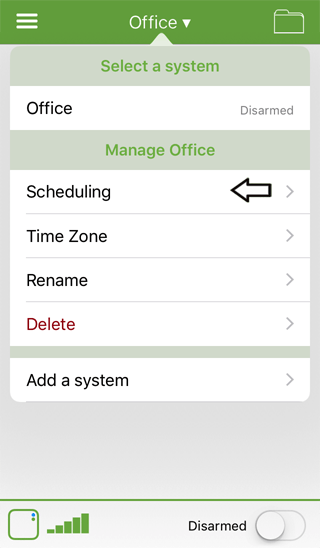 Whereas some systems send you emails to let you know if a camera has been triggered, Blink lets you know using push notifications. If family members and pets are always moving around then it’s probably a good idea to use the disarm option. Otherwise you can end up with hundreds of notifications and video clips clogging up your storage every evening.

Either you can disarm the entire system by toggling across the disarm button, or you can schedule in times when you want it to be armed or disarmed. As I work mostly from home where the system is based, I turn the cameras to disarm during the day as I don’t really want to watch lots of video clips of me going to the kitchen to prepare lunch or get snacks! Instead it’s far better if it’s armed late in the evening and at night time when we are in bed.

Video clips are stored in a ‘clip roll’ folder and if you have unwatched clips (and you probably will after a while) these are marked with a blue button. I opted for five second recordings which is really more than enough to see who is coming in and out. Another useful function is a live recording function (shown by a little camera icon on the bottom left of the screen below). This lets you see live footage from each of the cameras – although it’s not possible to record this directly yet. 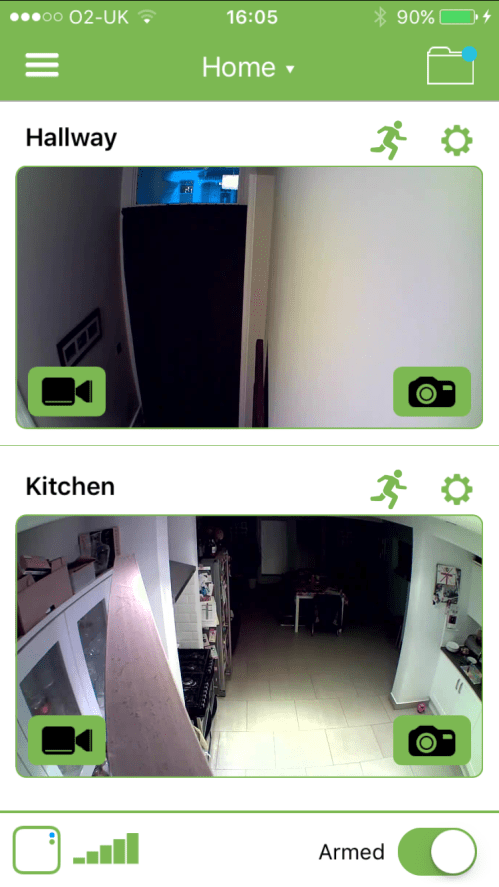 The Blink home security/monitoring system isn’t the first on the market. There are now quite a few products out there which offer similar functionality, including the Netgear Arlo. However, I do think Blink has done a really good job packaging up a home monitoring system that can be used pretty much straight out of the box and is very competitively priced. There are a few minor niggles with setting up the sync module and I think the app could be a little more intuitive (it’s not always clear what the icons are). However, these are very small issues when you consider what the Blink system can do for the money. I think for most people it’s not about catching burglars on camera (although this happened in the US). It’s more about being able to monitor your home remotely. In my case it’s handy to see when family members come home or what my dog is getting up to while I’m away! In short, I’m hooked and plan to get some more cameras to link up to the system in the coming months. You can watch my YouTube video review here.