Seems like smart security is one of the fastest growing tech sectors at the moment.

Rather than using a key or an easily hackable combination lock to protect your valuables, several manufacturers are introducing smart padlocks which use either biometrics (typically fingerprint recognition) or smartphone apps for identification – or sometimes both.

Last month we wrote about the Tapp fingerprint lock which raised a total of $237,313 on crowdfunding website Indiegogo – smashing the original target by over 500%.

Then last week we followed up with a round up of several home security products, including a Bluetooth smartlock from MasterLock which is similar to the Tapp except it doesn’t have fingerprint recognition. This is available in two versions for £69 and £89 for indoor and outdoor use.

Now we bring you news of two more smart padlocks set to hit the market. Pictured above is the Mobilock. Billed at the world’s first bike connected to the Internet of Things (IoT), it’s designed to be used as part of a bike sharing system, typically in a big city like Barcelona, Paris, Copenhagen, Hangzhou or New York

For example the smartphone app can not only be used to open and close the lock but also monitor and localise all of the bikes in a network in real time, wherever and whenever they are, without having to use GPS technology.

Instead Low Power Wide Area Networks – forming what’s become known as the LORA Alliance – make it possible to connect billions of devices over large distances with the internet, using 3G or 4G.

Because LORA chips and sensors need little power, the system hardly uses energy. A device connected to the LORA network is able to send data and commands for fifteen years using only two penlite batteries.

Apparently the company has already received requests from bike rental companies, holiday parks, hotels and other companies in the tourism industry.

“We are the first in the bike industry to apply this new technology,” says Managing Director Walter Nieuwendijk, who developed the innovative technology together with co-founder Willem-Jan te Riele.

“Thanks to LORA, rental companies can locate their bikes at any time and see who’s riding them. Also, the system barely needs energy, while old GPS systems – for instance used in cars – need a lot of power.

“With this addition Mobilock becomes the most complete and compact bike share system in the world.”

Another slightly more basic smart padlock is also due to launch very soon. Available from Australian accessories company Dog & Bone, it’s called LockSmart and will be demonstrated at the Gadget Show Live in Birmingham later this month.

The product, which is shown below, will be reviewed in the next couple of weeks on Tech Digest. 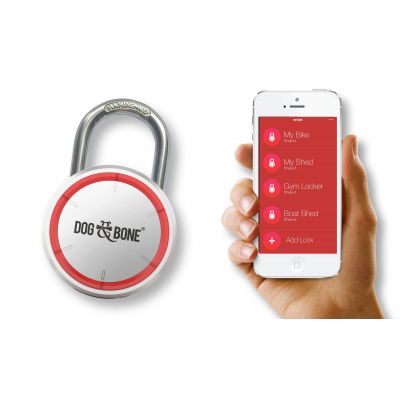