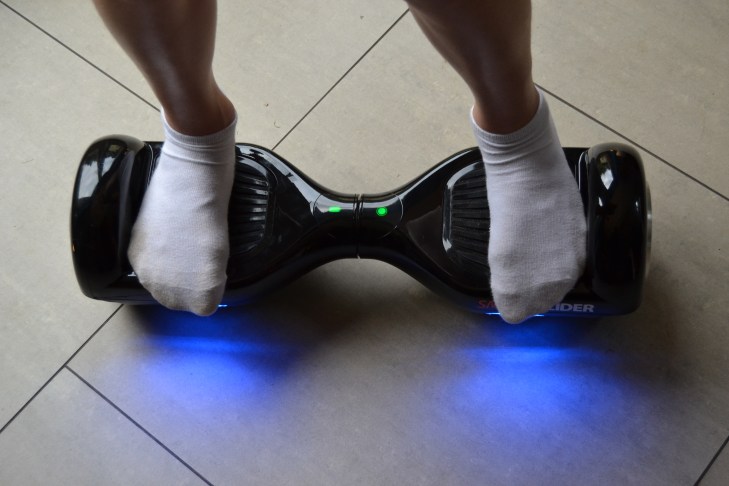 A few weeks ago my 12 year old son Archie and I reviewed the latest must-have gadget, popularly known by the kids as a ‘Swegway’.

We both raved about it. I called it a ‘revolution in private transport’ – and I widely predicted it would be one of the biggest selling gadgets this Xmas as well as a great device for using during a tube strike.

But now it seems these self-balancing scooters will be confined to the technological dustbin after the Crown Prosecution Service confirmed that the scooters are not legal, either on the pavement or on the road. See here. In fact the only place you will now be able to ride a Swegway is on private land – and then only with the landowner’s permission.

Given that the original Segway which inspired this latest generation of cheaper, more portable, self-balancing scooters is also subject to the ban it’s perhaps not surprising. But the fact that it’s taken a piece of legislation from 1832 (Section 72 of The Highway Act for England and Wales) which states it is an ‘offence to wilfully ride on the footway’ may surprise a few. Only certain vehicles used by disabled drivers are exempt from these requirements but only then if they are Class 2 or Class 3 invalid carriages.

Nor can you ride them on Scottish pavements either (under the Roads Act of 1984) or on public roads because they are not licensed for road use. Conversely, electric bikes are now allowed on the road under the Electrically Assisted Pedal Cycles Regulations of 1983.

So will the law actually make a difference to our behaviour? Simon Benson of self-balancing scooter distributor Ghetto Gadgets thinks not. He told The Guardian:

“Clearly customers need to take advice, but millennials are not going to take kindly to the authorities using a law that pre-dates the penny-farthing to tell them what they can or can’t do on the streets of Britain”.

He also believes that effectively making the products illegal will also make them more desirable to the younger generation.

He makes a good point about the legislation, but I’m not so sure he’s right. With current prices of around £399 to £499 I suspect at the moment most purchases are currently made by either reasonably wealthy adults or by parents for their ‘millennial’ children.

While the former market may not be affected at all (especially if we are talking footballers and pop stars with large amounts of private land), I think a lot of parents will now think twice before buying the self-balancing boards for their children.

To me it seems a great shame that the CPS has responded in this way, invoking legislation from the 1830s. Maybe if the lobby for self-balancing scooters was as powerful as that for electric bikes it may be a different story.

But for the time being at least if you want to ride one on public roads or pavement you do risk arrest and there aren’t many parents who will want their kids to be banged up on Christmas Day for the sake of having a bit of fun scooting up and down.