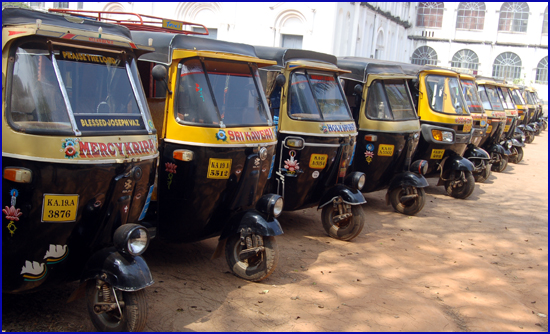 UberAUTO has launched a new cash-only service in New Delhi for hailing auto rickshaws, just as its rival Ola has announced its latest $310 million funding round.

Under the uberAUTO service, the company will not charge a fee for booking autorickshaws, users will be allowed to pay for the journey in cash, and the pricing will follow government fare rules, Uber said in a statement on Thursday.

“When it comes to getting around Delhi, auto-rickshaws are a staple. We recognise the history and value of autos to the transportation landscape. For us, uberAUTO is another way of using technology to offer more choice, making life simpler and keep Delhi moving,” Uber added in a blog post.

The launch of the service in New Delhi marks a departure from the company’s global business model which has so far only charged through credit cards and other electronic payment means, rather than cash.

“There were a lot of people who were not able to use an Uber because cash payment was not allowed,” Gagan Bhatia, general manager for Uber in New Delhi, told Reuters.

Uber has been running its service in New Delhi under a ‘no profit model in the aftermath of the alleged rape of a passenger. UberAuto continues that approach, and passengers will not have to pay booking fees or a service charge on top of the fare.

Auto rickshaws are generally regarded as the cheapest and the easiest way to get from A to B and it’s hoped that once the new user has the app there’s the possibility that they might, in time, ride with other types of Uber vehicles — which return higher margins for the company than a rickshaw.

Cash remains an important payment method across Asia, in spite of the convenience of cashless payments. Uber serves 11 cities in India, which makes the country its second largest behind the US. However, Ola remains the market leader with its coverage of more than 40 cities and towns nationwide.