Last night Chinese drone maker DJI held three simultaneous glitzy press events around the world to unveil its latest drone: The Phantom 3, which is an update on last year’s Phantom 2. And it brings an impressive array of new functions. 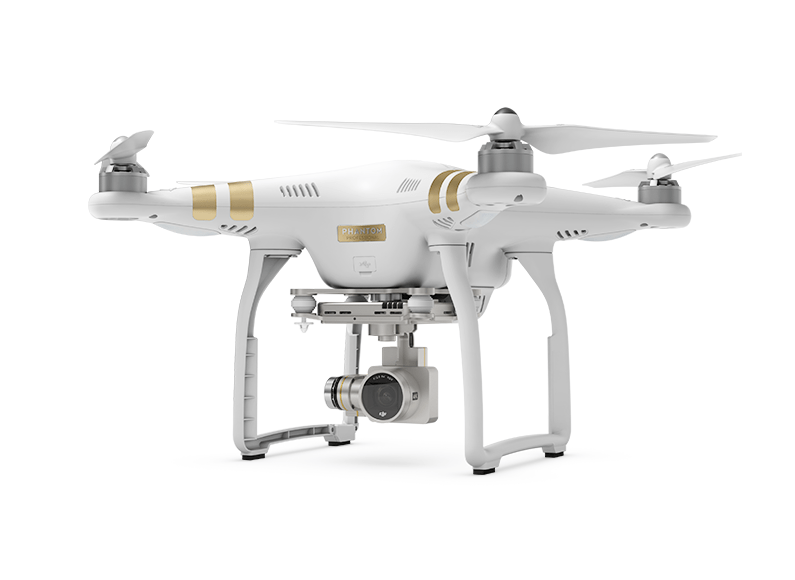 The new drone comes in two models – “Professional” and “Advanced”. The former will shoot in 4K at 24 or 30fps, and the latter can only do 1080p – but can shoot at 60fps, and the on board camera has a 94 degree field of vision – meaning images look more natural and less like a fish-eye.

On both, the hardware has received an upgrade – with better motors so that the drones can accelerate and decelerate faster, and also improved GPS which can now receive signals from more satellites, meaning that it can remain more stable and in place if you command it to. Interestingly too, there’s apparently a camera on the bottom of the drone that always faces down, which will build up a map of wherever you’re flying, so it will always know how far away the ground is, and where you are – even if there’s no GPS signal.

The remote control too has had an upgrade: You can now control the camera functions using the remote-control-car style pad, meaning you don’t have to take your hands off to fiddle with your phone when you want to start shooting video.

Perhaps most impressive was the improvements to the real time imaging. Like the Phantom 2, the Phantom 3 can use your phone to show you a live shot from the drone’s on-board camera, but to do this rather than faff about with extra hardware, the video picture is transmitted with the company’s “light bridge” technology to controller – which (presumably) then generates the wifi signal you can connect to with your phone. This means that rather than have the live images limited to the wifi range, you can now receive live 720p pictures from wherever the drone is.

The DJI app has also received a big upgrade: There’s now a flight simulator built in, for if you want to learn to fly your drone before smashing the real thing into a hedge, a built in flight recorder, and real time tagging of important moments – so that much like the recent GoPros, when it comes to the edit later on, you can skip to all of the important moments that you’ve tagged.

Perhaps most impressive is what DJI has enabled with the app: Live streaming to YouTube. Yes – what this means is that you can take live video from your drone hundreds of meters in the air, view it on your phone and send it live to the web. At the launch, we were shown a live shot of the DJI launch party in a small flat in Singapore – which after the presenter had finished speaking, the camera pulled back… and further back… and went through the window of the apartment block… and flew out into the Singapore sky. So we were watching live footage streaming from the sky, on the other side of the world, on YouTube. Mind-blowing.

Apparently the Phantom 2 was the world’s most popular aerial photography platform, so the PR people claimed, and the new model is the “new benchmark for creative aerial imaging”.