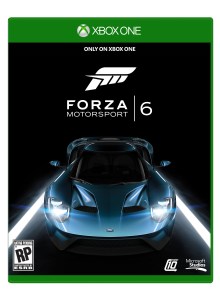 Along with the announcement of the new Ford GT, Microsoft, Turn 10 Studios and Ford took to the North American International Auto Show, in Detroit, last week, announcing the all-new GT as the featured cover car in the next iteration of the acclaimed Xbox racing simulation franchise, Forza Motorsport 6, launching exclusively for Xbox One.

The companies revealed that it won’t just be the GT making an appearance in the game. Ford’s entire performance vehicle lineup will appear in Forza Motorsport 6, including the Shelby® GT350 Mustang and the F-150 Raptor, which also made its debut at NAIAS. Fans will have the opportunity to virtually experience the cars when they debut in the Xbox game, as well as race them round a track.

At NAIAS, Phil Spencer, head of Xbox, said: ‘It is an honour to share this historic moment with Ford and celebrate the legacy of the GT by making it the featured cover car of Forza Motorsport 6.

‘We’re thrilled to have the unique opportunity to announce Forza Motorsport 6 the day the car debuts – on one of the biggest stages in the automotive industry – and we can’t wait to share more details on the game later this year.’

‘Working with Microsoft and Turn 10 Studios allows us to share our all-new GT supercar with an unprecedented global audience – giving fans an opportunity to virtually experience the beauty, thrill and innovation of Ford’s performance lineup.’

Gameplay will be unveiled at E3, in Los Angeles, in June.