Still trying to decide between PS4 and Xbox One? Whilst both consoles are very similar they still have a handful of exclusive games each – which could sway your decision. But which games are exclusive, and which matter?

To figure this out, we took the top 100 best selling games from last year and compared which were available exclusively on only one major format. Here’s the results: 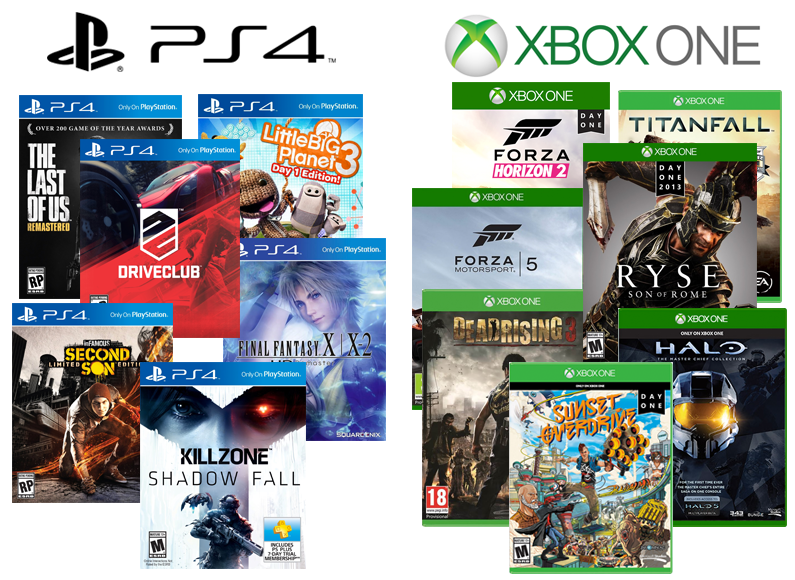 Note: We didn’t include Minecraft, as despite having separate PS4 and Xbox One editions, which are counted separately for some reason, it is essentially the same game on both platforms.

The Xbox One on the other hand has Forza Horizon 2, Titanfall, Ryse: Son of Rome, Forza 5, Dead Rising 3, Halo: Master Chief Collection and Sunset Overdrive.

Which set of games is better is open for debate: If you’re a racing fan then two Forza titles on Xbox One must be appealing, whereas if you prefer adventure games then The Last of Us on PS4 is surely more inviting.

One way to possibly compare is using the average review scores from the games – here we’ve taken the Metacritic scores for each game and averaged them out. And whilst the PS4 still edges it, it is incredibly close so there is no real difference in the quality of the games. 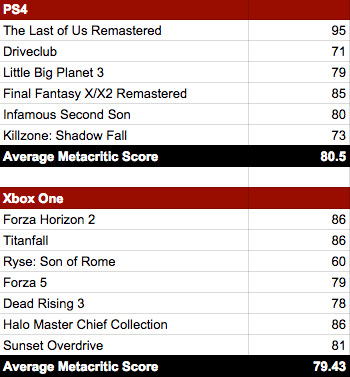 So which should you get? Its up to you – let us know which console you prefer in the comments.

One thought on “Does PS4 or Xbox One have the best exclusives?”