Lego has today confirmed that a viral image, purporting to be a message to parents contained within a Lego set in the 1970s is indeed REAL! 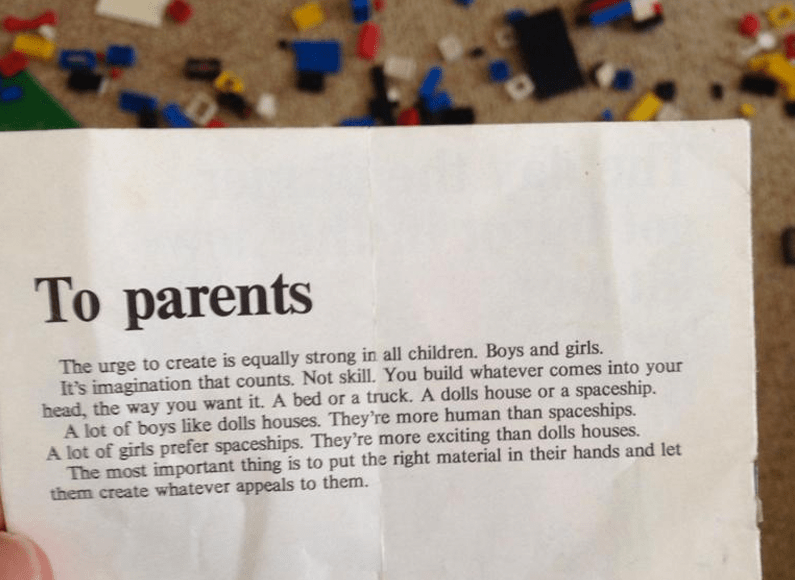 You must have seen the image, which has had over 6000 retweets, by now – it has been widely shared on Twitter and Facebook after appearing on Reddit – and it is heartening in how it shows some rather progressive views for time.

The big question though was whether it was actually real – there was plenty of circumstantial evidence that it was legit, but the exciting news is that despite being suspiciously perfect for the likes of Upworthy and looking like it was made in Microsoft Word, it is indeed real.

The text is from 1974 and was a part of a pamphlet showing a variety of Lego doll house products targeted girls aged 4 and up from the 1970’s. The catalogue was included with select sets in the doll house series in 1974.

”The text remains relevant to this day – our focus has always been, and remains to bring creative play experiences to all children in the world, based on the LEGO brick and the LEGO system – ultimately enabling children to build and create whatever they can imagine.

“This is visible today across the entire product range from the LEGO Group – every LEGO product is based on the LEGO system and this creative building experience.”

Brilliant news – something on the internet was definitely real for once! Now if you’ll excuse us, we’re going to go and marvel at this Lego video again.