This afternoon I was lucky enough to see a live demo of Apple’s CarPlay at Pioneer’s UK offices – read on to hear what I thought. 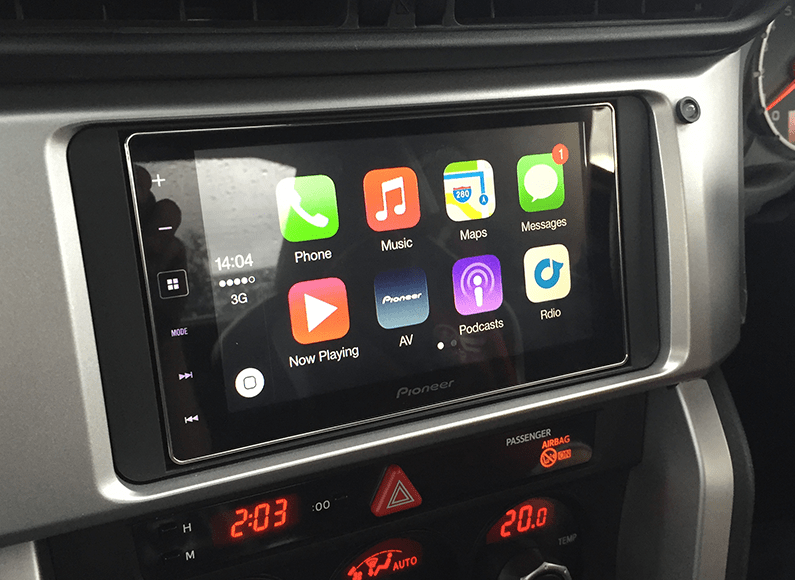 For uninitiated, CarPlay is Apple’s first foray into in-car entertainment. Whilst we’ve been able to connect our phones via bluetooth for taking calls and USB for playing music for some time, CarPlay is for the first time taking the car seriously. Both Apple and Google (in the guise of Android Auto) have recently launched in-car systems that have the potential to be as revolutionary as they iPhone. In essence, cars will have apps.

CarPlay is so new that so far Pioneer is the only manufacturer to have devices which support it. A few weeks ago the company launched a new aftermarket CarPlay device (designed for fitting in old cars, replacing the radio) – the catchily named SPH-DA120, and that’s what I saw it running on today. As you might expect, more manufacturers are expected to support CarPlay shortly – with it being installed by default in a number of new cars from this year. 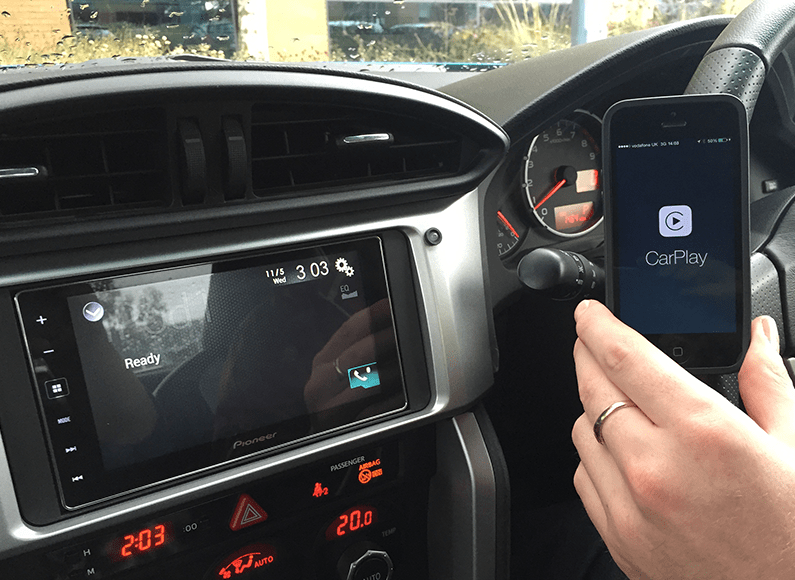 So how does it work? Essentially, it is delightfully straightforward. Without anything plugged in the SPH-DA120 functions like a normal on-board computer for a car using Pioneer’s own custom navigation and music interface, which you can also use to control the radio. Once you plug in your iPhone though (lightning connector only – sorry older iPhone users), a CarPlay button will appear. Hit that on the touchscreen, and you’ll be greeted by a familiar, if somewhat simplified, iPhone-style user interface.

The way it works is that most of the legwork is done by your phone – with the screen playing a relatively “dumb” role. What this means is that any apps you’ve downloaded from the app store that have in-car compatibility will automatically appear on the, umm, (literal) dashboard. At the moment this is only a handful of apps like Apple Maps, Spotify and Stitcher, but this will inevitably grow (albeit within Apple’s restrictions – so no YouTube whilst you’re driving along).

And essentially, it just well… works. All of the major functions in the apps I saw running had been simplified, and crucially the interface was heavily driven by Siri, who you could command to carry out tasks: Asking “How do I get to Kings Cross?” would automatically load up Apple Maps, and so on.

On the SPH-DA120 (they really need a better name), Siri was triggered by an on-screen “Home” button – but when CarPlay comes baked into new cars, the expectation is that there will be a button on the steering wheel to activate Siri.

It was interesting to see it running in a real environment too. I’m not sure if it was the Pioneer unit or if it was the iPhone powering it, but the interface seemed a little more sluggish than running normal apps on the phone – forcing you to wait an extra second whenever Siri was activated. The 6.2″ WVGA screen too seemed more ruggedised – needing a proper poke with the finger to work, instead of a light brushing with the finger, as on the iPhone itself.

What’s particularly cool is how CarPlay supports resume – so if you plug your iPhone in, set an album playing and fire up the SatNav, and then for whatever reason have to unplug your phone, when you plug it back in CarPlay will pick up right where you left off.

Notifications were handled interestingly too. Obviously phone calls appear full screen, and you can take those in the car as you’ve been able to for years using bluetooth, but other apps are (perhaps deliberately) inconsistent. For example – text messages (and presumably iMessages) will appear at the top of the screen with the option of being read by Siri, but if you use other chat services like WhatsApp or Facebook Messenger you’re going to be out of luck. Whether this will change if/when apps add official CarPlay support, or if Apple will deliberately exclude other services to encourage use of iMessage remains to be seen. 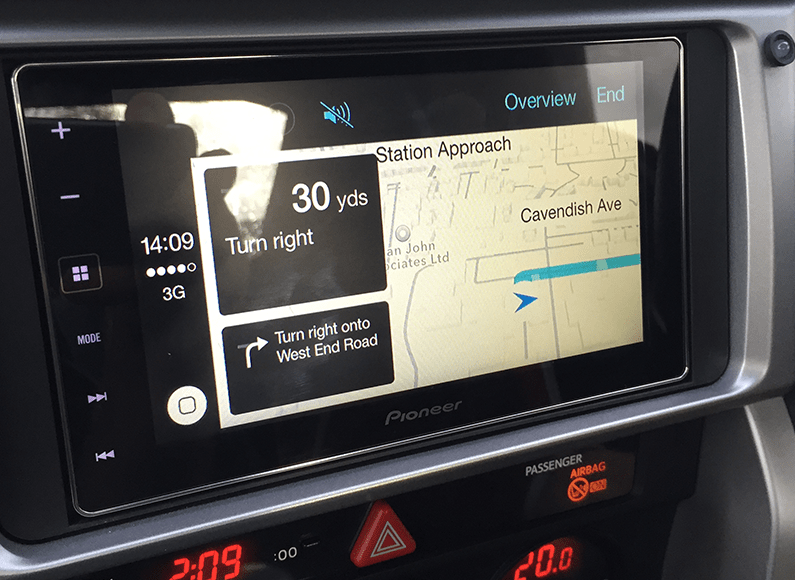 So what’s the verdict? Whilst this definitely isn’t a review, having not spent too much time with the system, it does seem as though today I’ve had a glimpse of the future.

The Pioneer system itself seems like a step forward – albeit a pricey one, starting at £350, but it does come with some nice additions: The Pioneer system comes with its own GPS receiver (to help you get signal in the car), and its own microphone which you can mount on the steering column – apparently its software is also capable of simply doing an AirPlay screen mirror of your phone too if you want to use apps irresponsibly whilst driving – but with all due respect to Pioneer, it is very much the Appleness of this device which is going to make it important.

Apps are going to be essential to getting the content we want into our cars, and it is going to be up to the likes of Apple and Google to provide the platform (we don’t want a situation where every car manufacturer has its own platform). The fact that Car Play just works is a massive boon, and it’ll be interesting to see what happens once more developers to get to grips with it.

One thought on “Hands on with Apple’s CarPlay”