Images of what’s thought to be a new Nokia handset – the Lumia 830 – have been spotted by WPDang on Weibo, a Chinese service similar to Twitter. 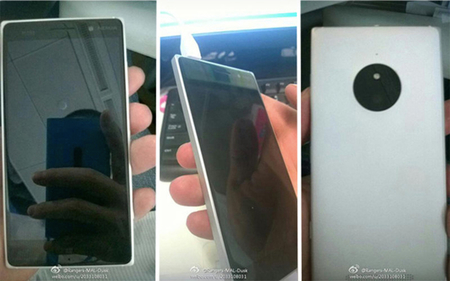 This isn’t the first time we’ve heard about the 830. On several occasions, the handset has popped up online under the mask of two codenames: Tesla and Superman.

However, the images leaked today are our first glimpse into what the handset will look like upon its release. And what’s interesting is that the ‘Nokia’ branding seems to have been retained here despite Microsoft’s acquisition of Nokia’s phone business. (MS will have to kill off the Nokia name at some point).

Design-wise, the handset doesn’t look that bad at all. In line with previous devices, the phone has a polycarbonate rear – but it appears to be surrounded by a metal frame.

And placed on the back of the phone appears to be a black circle that houses a large camera lens and a flash. This is similar to what we’ve already seen with Nokia’s Lumia 1020.

At the moment we’re unaware of the spec, and Nokia of course hasn’t confirmed the existence of the phone. But the leaked images certainly do make a convincing case that it exists. We’ll keep you posted.