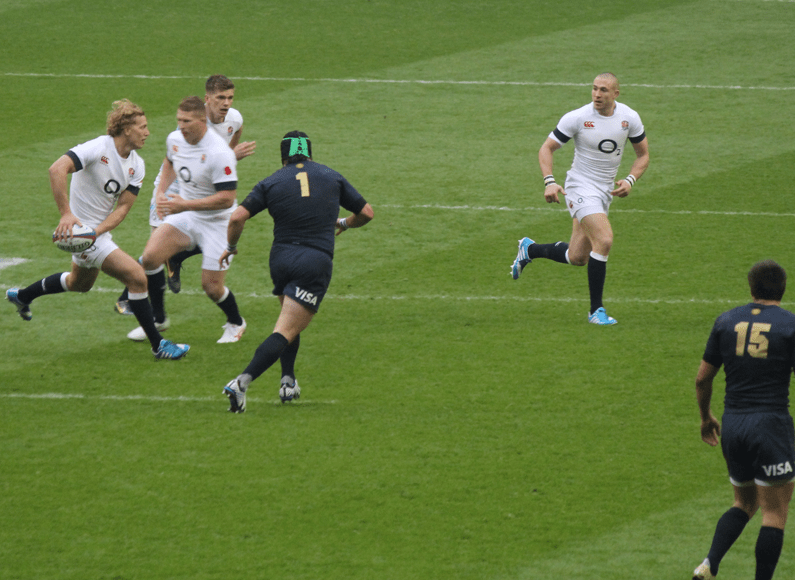 Since eventually turning professional nearly 20 years ago, rugby union has led the way in terms of incorporating technology into both the coverage of the game and its officiating. With ‘ref-cams’ giving fans an officials-eye view of the game and microphones allowing both spectators and TV viewers an opportunity to hear the interactions between players and referees, there is no doubt that supporters now feel closer to the action than ever before.

Whilst many of the technological advances thus far have enhanced the game, however, there are valid arguments against too much further technological tinkering and even arguments suggesting that the role of technology be reduced in refereeing.

Viewers of rugby union tuning in to the English domestic game’s showpiece Aviva Premiership Final back in May could certainly be forgiven for questioning the role of the ‘TMO’ or Television Match Official. With the on-field referee having seemingly awarded a try to Saracens’ England fly-half Owen Farrell, the TMO interjected and suggested that there may have been a forward pass in back play, the try was subsequently referred ‘upstairs’ and chalked off. Whilst the decision to disallow Farrell’s try may have been correct, the fact is that the on-the-field referee must retain decision-making supremacy- he should instigate a referral rather than the TMO forcing his hand. The fact that Saracens went on to lose the game in extra-time made the TMO’s intervention even more difficult for Farrell and his team mates to accept.

The decision by the TMO to interject and suggest that Farrell’s try should be looked at again could serve to reinforce on-the-field referees’ reticence in acting on their instincts. Too often referees refer decisions on to the TMO with no clear reason why; their request for a second opinion regularly being prefaced by the question ‘Is there any reason that I cannot award the try?’ If the referee thinks that a try has been scored then he should confer with his touch judges and award it- he should have more confidence in the ability of his team to make the right decision. Recent years have seen games becoming longer and longer as more and more decisions have been referred to the TMO and the fear of being seen to make a mistake has increased.

The nature of rugby union often means that, even when the TMO is asked to adjudicate on a try, the final decision is still a ‘best guess’. With the ball spending so much time being contested in rucks and malls it can be impossible for the TMO to get a clear picture; the best angle is often the one viewed by the on-the-field official. Similarly, TMOs may find significant difficulty in adjudicating on a forward pass- different camera angles can give a different impression; this is why ‘video referees’ in rugby league’s Super League are not able to look at forward passes.

One solution to the problem of whether or not the ball has crossed the try line and, potentially in the future, whether a pass was forward or not could be offered by Hawkeye who have recently shown an interest in applying their skills to the 15-man code. Hawkeye have been hugely successful in applying ball tracking technology to cricket, tennis and Australian rules football, and could remove all subjectivity, and a lot of wasted time, from decision making. Despite this, the technology has still to be adopted- this is presumably due to cost and because whilst it could say whether the ball had crossed the line, it could not confirm whether there were any defensive hands underneath it at the time.

In addition to fans frustration at a lack of consistency in when the TMO is used, there is also significant confusion about how he should be used. In some circumstances, for instance, the TMO is asked to make a decision as to whether a try should stand or not, in others, where there is a ‘big screen’ available, the TMO is simply there to provide replays to aid the on-the-field official in making the decision. Similarly, recent rule experimentations have allowed the on-the-field referee to request that the TMO take a judgement on possible foul play- whilst this has added further to decision making delays it has, at least, ensured that perpetrators are dealt with at the time of their offences. For consistency, the Aviva Premiership can also boast TMO facilities at all games so that all teams benefit (or suffer) from the increased scrutiny regardless of whether or not their games are televised.

Technological advances have revolutionised sports broadcasting and decision making in recent years, and rugby union has always been an early adopter of technological innovations. The results of this adoption have been a thriving international and domestic game enhanced by the scrutiny and openness offered by multiple cameras and microphones. After years of advancement, however, it could be time for rugby union’s decision makers to row back slightly- there must be clearer protocols about when and how technology should be used, and on-the-field referees must retain precedence. Technological advancements which improve consistency and speed up the game, such as Hawkeye, should be pursued; there should be no rush to adopt technology for its own sake. Fans of the sport and followers of rugby odds want to see common sense and officials given the freedom to take decisions. Rugby union supporters are the lifeblood of the game, any further technological advancement must be in their best interests.