An advert for the Electronics Arts mobile app game Dungeon Keeper has been effectively banned by the UK’s Advertissing Standards Authority after complaintss that it wasn’t actually “free to play” at all. 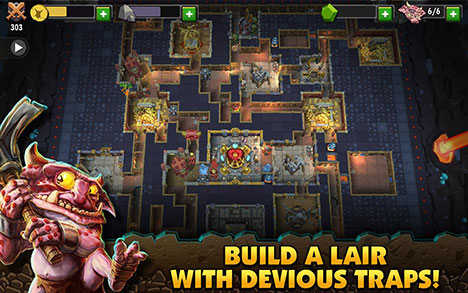 A complaint against EA over its advertising for the game argued that an email marketing campaign that advertised the free game was misleading because it did not make clear that “gameplay was severely limited unless in-app purchases were made”.

“GET DUNGEON KEEPER ON MOBILE FOR FREE! … DIG. DEVISE. DOMINATE. Build the most badass dungeon ever! Raise an army of diabolical minions and lay twisted traps to destroy any opponents foolish enough to set foot in your lair. MASTER THE HAND OF EVIL Cast powerful spells, pillage and plunder other players’ dungeons, and slap your imps around to make them work harder. A world of wicked fun is right at your fingertips. What are you waiting for, Keeper? Get it for FREE!”

The ASA has ruled that in future advertisements, EA must make clear the limits put on free gameplay and the role of in-app purchases in the game, particularly when it comes to speeding up gameplay.

“We regarded it as extremely likely that players would reach a position where they would be unable to take any further meaningful or progressive action in the game until a timer had finished or been skipped, and that these periods would become longer and more significant, and the cost of skipping increasingly higher, as the player progressed,” the ASA saidd in its ruling.

The watchdog has ordered EA to ensure that future ads make clear the limitations of free gameplay and the role of in-app purchasing.