Since I took up cycling a couple of years ago, I’ve become something of a militant cyclist. Having to take to London’s roads is not a pleasant experience for much of the time, because the city is so poorly equipped to deal with people on two wheels. It’s insane that Transport for London hasn’t done more about it too – given that cycling would be good for the environment, congestion, public health and… pretty much everything. But that’s a rant for another day.

So much of a militant cyclist have I become, that I read cycling blogs written by other militant cyclists where they mock up ideas for how junctions should be improved. Whenever London Mayor Boris Johnson does an #AskBoris Twitter Q&A, I’ll be the first to send a sarcastic message reminding him to sort out cycling.

And this is why this saddens me. It isn’t unique – it happens with depressing regularity on social media. After sending an ill-judged tweet about cycling, Twitter’s mob decided to hound the person who sent it, and possibly got her sacked. 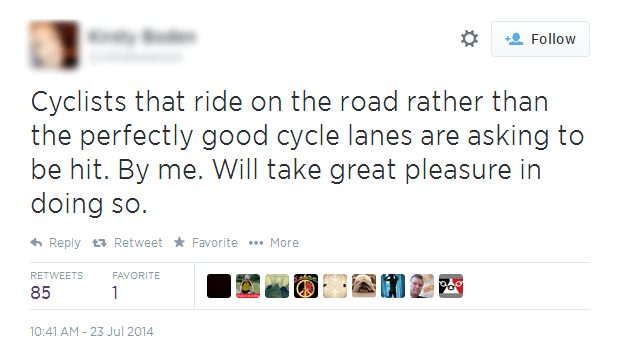 Yes, this is a very silly thing to say – even if she was joking. And it is arguably offensive too – especially in the context of so many cycling deaths, especially in the capital. But the reaction from Twitter’s cyclists was horrible.

A screenshot of the tweet was posted on the Facebook page of a popular cycling website and it became rather popular. At the time of writing it has 625 likes and 350 shares. The commentators decided to really go after the tweeter. They not only harassed her via Twitter (to the point where she had to delete her account), but took delight in digging up her Facebook page and where she works. Worse still, they thought it would be fun to tell her employer about the tweet – potentially jeopardising her employment. And this is on top of the hideous jokes about her appearance (complete with photoshops) and assumptions about what she is like and who she is.

Way to go guys – you’ve targeted your attack on someone with no public profile, and possibly cost someone whose circumstances you don’t know their job. What if she has a family she needs to feed? Or her job is helping her get back to normality following medical problems? (etc, etc). What if it turns out she finds being on the receiving end of abuse from hundreds of people ganging up to bully her unpleasant? Imagine that.

At the start of this piece I tried to get across just how ideologically on board I am with the cause of the cyclists – to underscore my point. This sort of behaviour really, really stinks.

This was not a glorious day for the cycling community. And it is another textbook example of how for some reason, when we take to social media, we somehow lose our human faculty for empathy.

What’s sad, of course, is that this is far from the first time that this has happened. Famously last year we had the case of feminist Caroline Criado-Perez being hounded for daring to campaign to put a woman on a banknote. (Interestingly, she was relentlessly abused by both misogynists and other ‘feminists’ who identify with a marginally different type of feminism… its complicated). Pretty much every community I’ve ever encountered on Twitter has its own stories like this too.

Twitter justice is consistently shown to be a strange beast. It is almost a running joke about what “Twitter” is angry about today. What’s weird is that social media seems to completely change both the boundaries of what we find acceptable, and our perception of what constitutes a ‘proportional’ response. If you were sat in a pub and heard someone on another table express an opinion you disagree with, would you march over and shout them down? Or phone their employer and tell them what they said? Would you do the real-life equivalent of sending an “[email protected]” tweet (with a period before the @, so all of your followers can see) and summon your gang to all head over to the other table at the same time?

What’s particularly interesting is what happens when the person being attacked isn’t a particularly sympathetic character. Take the person sending the above tweet about cyclists, or even one of Twitter’s regular cast of villains, like former Apprentice contestant Katie Hopkins. But even in these cases, I’d perhaps advocate taking a “just war” approach.

Without wanting to go into the details of a philosophical debate that has waged from Thomas Aquinas to Kenneth Waltz (hey, it’s Friday afternoon), in war there are certain rules that affect how justified and legitimate a military action is seen as. The latin phrase Jus ad bellum is used to describe whether a cause is legit. This is what Twitter is good at: sniffing out the people who are wrong, stupid or offensive.

But once in war a different set of rules come into play: Jus in bello (“justice in war”), which is concerned with issues like who is being targeted and whether a response is proportionate. For example, whilst most people would probably agree that the United States was justified in defending Kuwait after Saddam Hussein’s Iraq invaded in 1990 (in the first Gulf War), if President Bush (Sr) had responded not with tanks but with nuclear missiles on Baghdad, it wouldn’t matter who started it – the US would have become the bad guys. It is this sense of proportionality that Twitter and social media in general is often missing.

In other words, if you behave like a dick towards a dick, you’re still a dick.

Obviously no analogy for behaviour on social media is perfect. It is an entirely new medium of communication – with the mechanism behind it fundamentally changing how people can interact. You can’t even compare, say, Twitter, to text messages or internet forums, when you try to fully conceptualise the etiquette behind a pile-on. But we can still aim to behave like humans, right?

Essentially, what I’m doing is making a plea to anyone who uses Twitter or Facebook: Use social media to take down Mubarak, sure – but if it is anyone else, it might be worth thinking about proportionality before getting people sacked. Think before you tweet.