TV viewers were unable to watch or listen to their favourite BBC shows online for more than 24 hours over the weekend, when the corporation’s TV and radio iPlayer service was hit by technical issues. 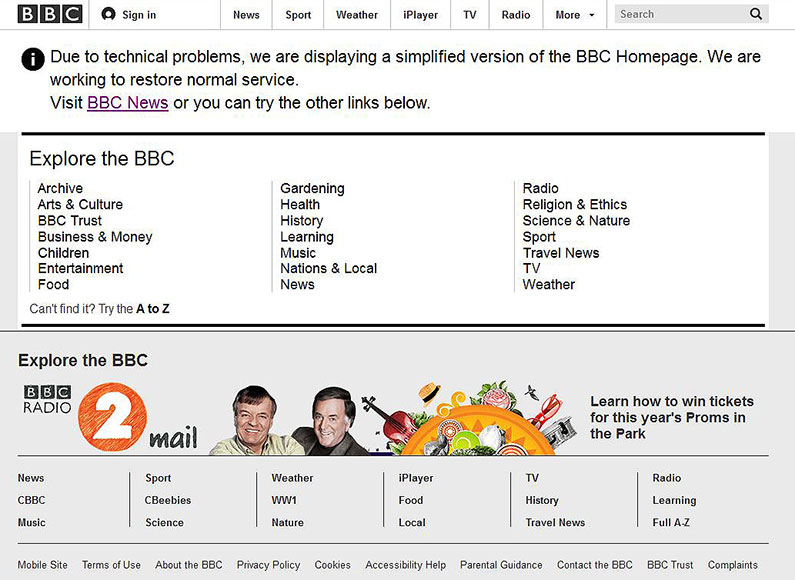 The gremlins also got into the BBC website’s front page.

An error message on the page reads: “Due to technical problems, we are displaying a simplified version of the BBC Homepage. We are working to restore normal service.”

A similar message was displayed on its iPlayer page: “BBC iPlayer is temporarily unavailable due to a technical problem. Please try again later.”

The outage prevented people listening to popular radio series The Archers on demand, as well as catching up with the Eastenders omnibus, Russell Howard’s Good News or QI.

The issues started on Saturday morning, and the BBC press office has been tweeting a series of apologies.

Apologies. We know some users are still unable to access @BBCiPlayer. We’re working hard to resolve the issues. Thanks for your patience.

A BBC spokesman said: “We’re aware of an issue which means some people can’t access certain parts of BBC Online. We’re working hard to fix this as soon as possible.”

Let’s hope that the Beeb’s technical problems are sorted out quick smart. According to MSN, the BBC has announced that it will trial technology that uses EE’s 4G network to transmit live video to a dedicated applications during this summer’s Commonwealth Games in Glasgow.